Just a quick update to let you all know I'm safe and well. Our house suffered a bit of damage in the form of cracks and jammed doors, as well as some liquefaction in the back yard which flooded the garage and dumped a huge amount of sand right outside the back door. The house is liveable though - amazingly our chimney is still standing!

I'm staying with family in Timaru at the moment, but hoping to return soon to begin the cleanup. Jon is still in Chch as he had to go to work. Power is now back on, but no water.

Thanks for all the messages and emails. I'm as well as can be, although heartbroken at the loss and destruction all around. We've had so much help from family, neighbours and strangers that I will be forever grateful for. Thanks again everyone, it's heartening to know you are thinking of me. 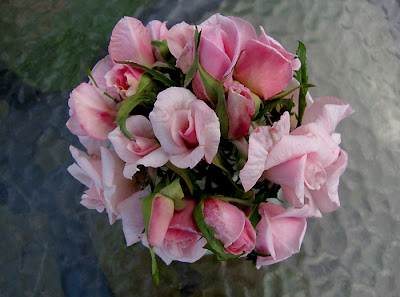 My climbing rose Cecile Brunner has been flowering for a couple of months. You'll see her in the background next to my shed in the previous potager post. She gets a bit unwieldy this time of year, so I usually give her a haircut to tidy things up and hopefully encourage some more flowers. Then I take all the little rose buds that were snipped off, and put them in my bubble vase. 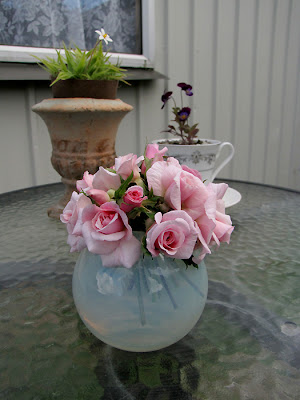 So pretty, and they smell divine too. I love the perfection of these tiny blooms - almost too perfect to be real. I like to put the vase beside my bed, from which spot it will perfume the whole room. Instant well-being. 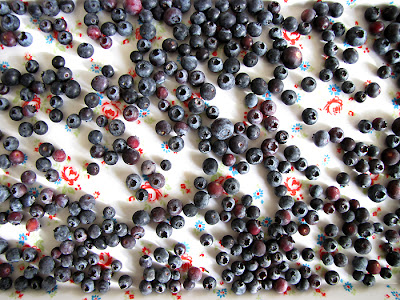 Today we went blueberry picking at Broadfield Berryfruit. It was the last day of the season, but we still managed to pick 1.2 kg of fruit. Then I spread them out on trays to freeze. Once frozen I scooped them into freezer bags. I'm looking forward to all kinds of blueberry baking... hotcakes, muffins, cakes, puddings... and after seeing this recipe on Bridget's blog, blueberry friands are also on the list! 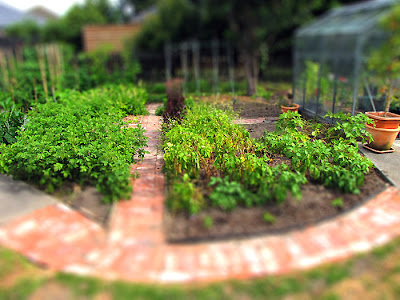 I've always wanted a dollshouse with a miniature garden, and thanks to Tilt Shift Maker, this is what my potager would look like as a mini! Cute no? Lookit the teeny glasshouse! Bet there are no weeds to pull in a mini garden either...
at 20:53 5 comments:

Stages of a potager 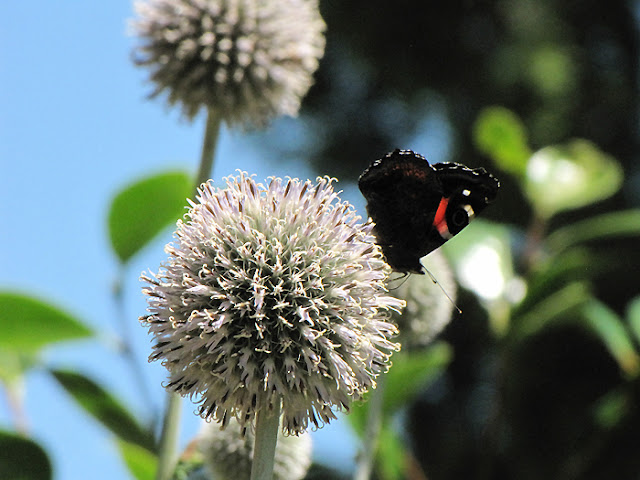 Hi again! I hadn't intended to be away for so long, in fact I had plenty of posts thought out. But when it came to actually writing them, I found I would rather be sitting in the sun, or reading a book, or working some crochet. The garden has been overwhelming me a bit too as it's growing like mad and seems like an overgrown jungle. The potatoes are manky and the tomatoes are gigantic flopsy triffids. Anyway, I decided it's time to pull together all the photos of the potager over the past year as it's developed, so at least I can remind myself that I have accomplished something, even if there's a lot more work still ahead. 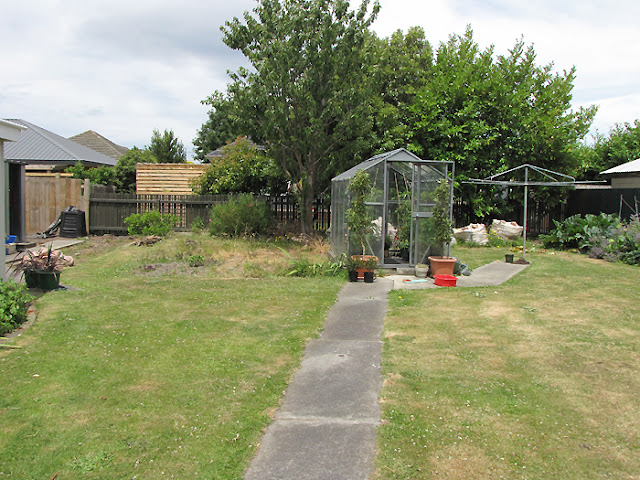 January 2010 - This is how it looked before I started. Scruffy shrubs, dead grass, oxalis and a weedy vege patch were what I had to work with. 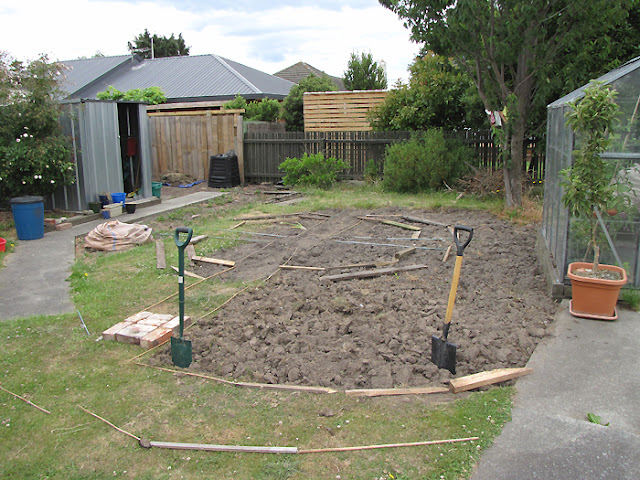 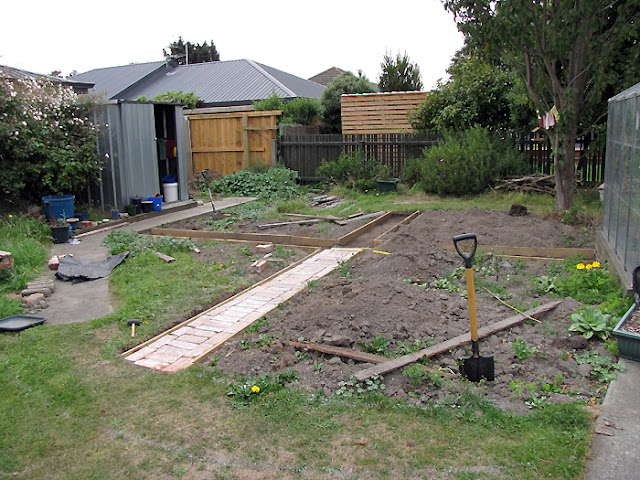 28 March 2010 - I dug trenches for the paths and lined them with planks of wood for the edging. Then I laid down weed mat, and coarse builder's mix for the base. Then I laid the bricks, knocking them into place with a rubber hammer. Finally I brushed Pavelock sand between the bricks - this sand turns hard when sprinkled with water, so the weeds shouldn't grow through. My paths aren't perfect, and the width fluctuated a bit. In some parts I had to chip away at the bricks to get them to fit, and in other parts I had to pack extra sand around them. I just remind myself that the rustic look is what I am going for here! 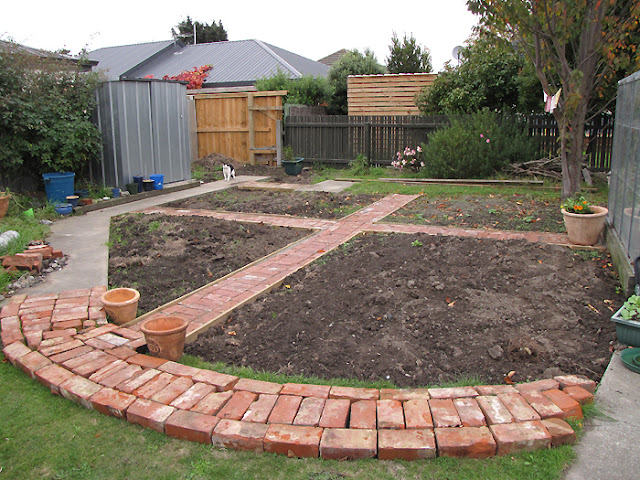 23 May 2010 - Two months later and I've managed to finish the cross paths, work out the positioning of the bricks for the curved path and dig over most of the beds. You would not believe how much rubbish was under the top layer of dirt... bricks, broken glass, whole glass bottles, shards of pottery, coal, rusted metal and even a pair of rotted boots! 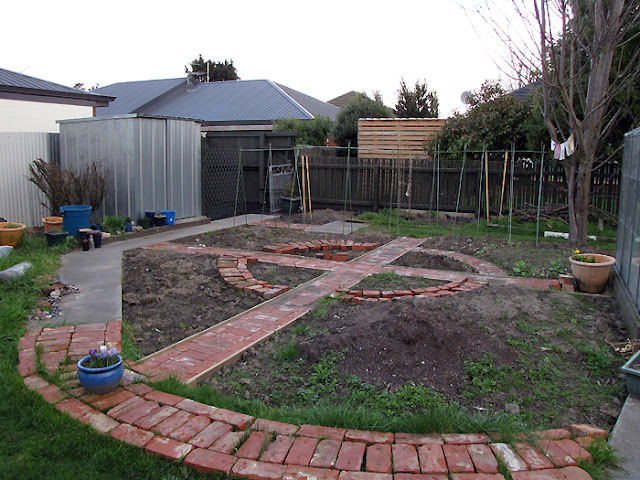 13 June 2010 - I wanted to plant my garlic, but I couldn't plant up that bed until the circle path was laid (or I'd just end up trampling on the bed while I did it). The circle path was the most important element of the design to me - I love the symmetry and strength of the lines. I'd have preferred not to have the straight paths crossing right through the centre - it would be nice if they stopped at the edge of the centre and I could have a sundial or something in the middle of a round bed. But that was not going to work for several reasons... firstly, I'm a building novice learning on the job, and it was just too damn hard for me to work out how to connect the paths at that stage. Secondly, I like to be able to dash in and out, bring the wheelbarrow through etc and though pretty, that layout would not have been especially practical. And thirdly, I like having my four little "quarter" beds - they are a great manageable size and good for planting with "little" crops such as lettuces. 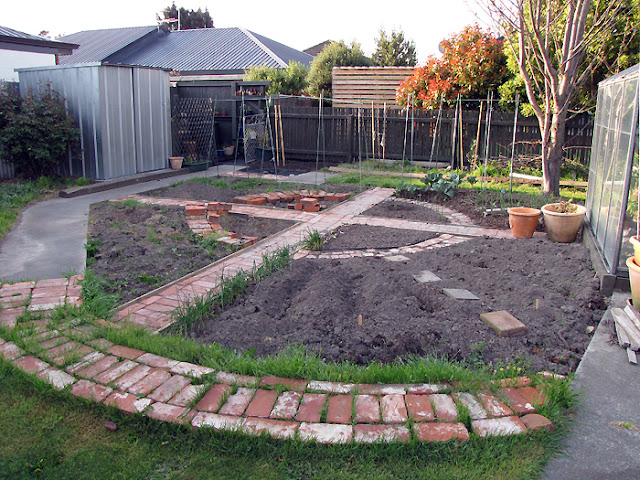 3 October 2010 - I delayed laying the rest of the circle paths for as long as I could because believe me, I was well and truly over bricklaying by then! But I wanted to plant my spuds, so I needed to move onto the next quarter. I used recycled black plastic garden edging to line these paths, because it was the only thing I could think of that would curve. It worked, but presented its own set of problems, mostly because it would warp and buckle when I hammered the bricks in. So most of these curved paths do have wonky fluted edges if you look too closely... which is why I've since grown lettuces along the edges to hide all that! 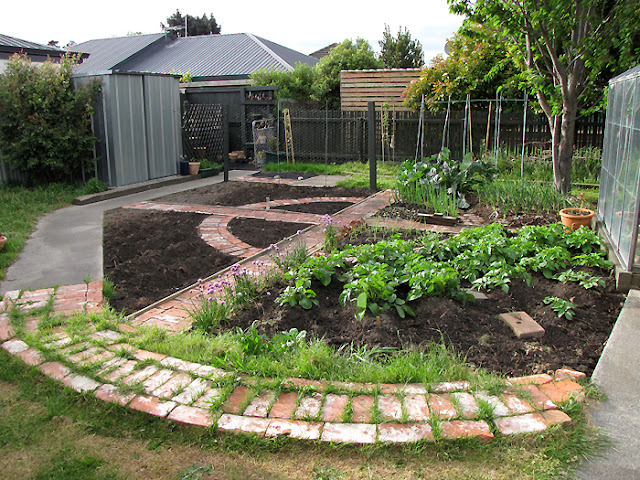 5 November 2010 - the circle paths are finally finished! I just have to do the outer curved path, before it gets completely overgrown with grass. 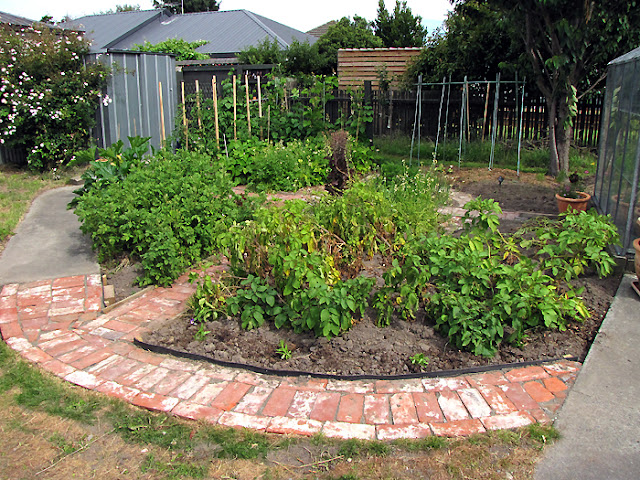 10 January 2011 - One year later, and all the bricks are finally in! Not that you can see much because of all the monstrous vegetables, but I'm planning some more traditional potager style plantings for winter that might highlight it a bit better. I also want more flowers in there amongst the greenery! In the meantime, the harvest is coming in. This week I've brought in spuds, tomatoes, carrots, lettuce, rocket, rosemary, thyme, spring onions, red onions, zucchini, chilli peppers (glasshouse), runner beans and strawberries.

Well, I've come a long way baby, but there's always more to do. It's taken me three nights to organise the photos and write this post, so maybe in a week I'll have another for you! In the meantime I'm going to browse through my folder of inspirational potager images and dream about next season's layout.
at 21:05 9 comments: