Handmade Christmas present round up

This is a round up of the gifts I made this year. It's not as many as in previous years - I had to cut back a bit or I'd have been holed up in my craft room all year! I started fairly early, October I think, and made a big pile of Christmas cards as well. 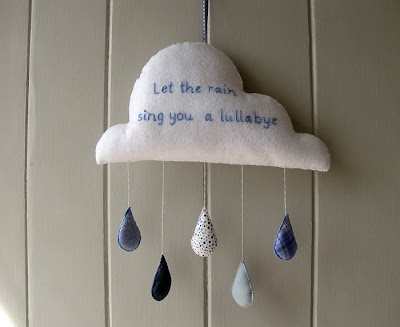 This little cloud mobile was easy to stitch up from felt. I made three of them, one for my nephew, one for Jonny's nephew and one for my goddaughter. The raindrops are scraps of cotton fabric.

The quote on the front was hand embroidered. It comes from quite a beautiful little poem by Langston Hughes: 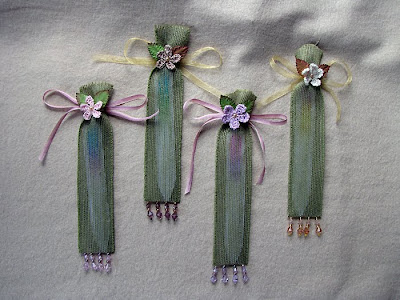 These were presents for my workmates. They are coloured glass nail files, and I made a little sleeve for them from the green openweave ribbon. 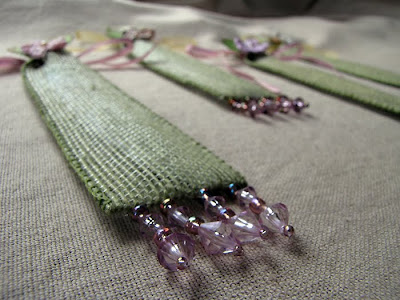 Stitched a few beads at the bottom for added sparkle... 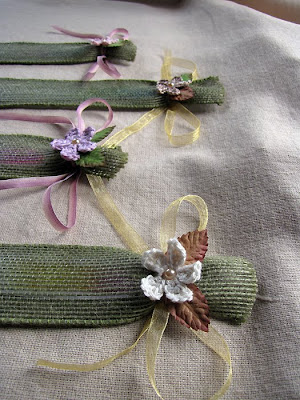 ... and attached a flower and ribbon at the top. I was going to make one for myself to keep, but of course I never quite got round to that and I'm unlikely to do it in the future! 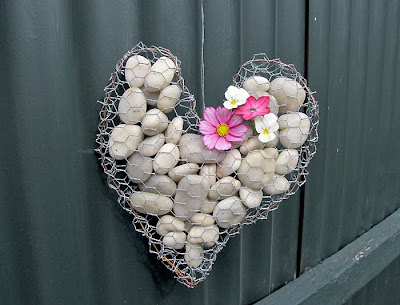 This wasn't made by me, but for me (yay!) My mum made it - you might recall seeing a similar one in her garden in my first Real Gardens post.

That's it for the round up this year. Did you give or receive anything handmade? 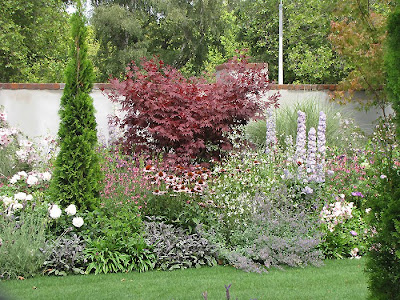 This is a picture I took at the Ellerslie Flower Show this year. It's been on my desktop ever since, burning itself into my consciousness until I'm sure it's only a matter of time until it just turns up one day outside.

The design is "An Englishman's Retreat" by Chris Beardshaw. The key elements are the tall trees and the spires of the delphiniums, and the colour scheme of purple, silver and shots of red. 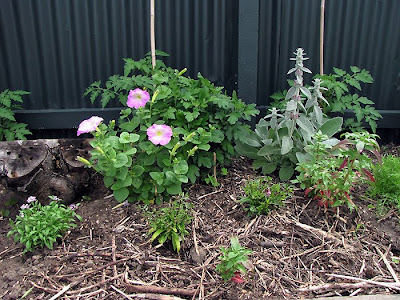 And here is my garden... not looking very similar at all I know! I grew most of these plants here from seed, and they have not been particularly quick off the mark, even with the warm spring. The exception is this rampaging petunia, although it comes with its own story of failure (out of a packet of about 100 seeds, only 4 germinated). The other plants are alyssum, angelonia, godetia, gilia and lambs' ears (which is going well - it's already been divided about 4 times). And of course, some extra tomatoes next to the fence. 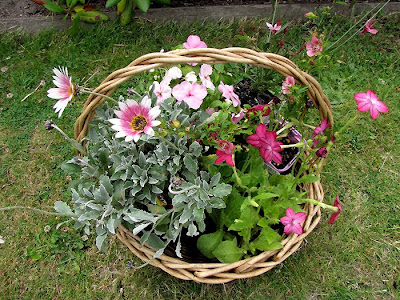 Anyway, I'm really craving an abundant garden filled with flowers. My slow seedlings weren't cutting it, so I went to the garden centre and looked for Plants That Are In Flower Now. Happily, I managed to make most of my selection from the bargain bin too.

I got gaura (pink and white), nicotiana, impatiens, echinacea Hope (the same as in the show garden! Yay!), arctotis and a pretty, cottagey shrub with pink flowers that I forget the name of. 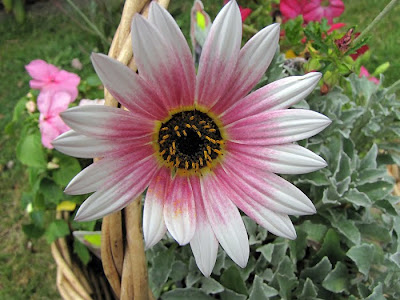 Close up of Arctotis Louise. I'm going to put this along the side of the driveway - hopefully I'll be able to divide it into two or three sections. 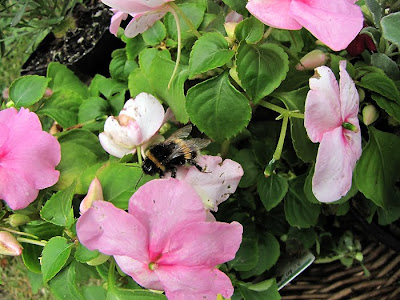 Today was 31 degrees C, so I waited till late afternoon when it was a more modest 25. Then I planted them, watered, mulched, and admired... and completely forgot to photograph! The forecast for tomorrow is rain, which is good for little plants establishing themselves, but not so good for photos. Anyway, I'll update when I can. 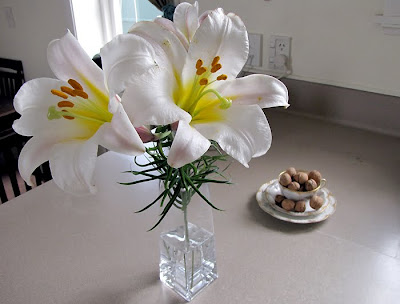 I'm a little relieved that Christmas has been and gone - what with everything that's gone on this year I really wasn't feeling the spirit! I had a nice, whirlwind kind of day catching up with lots of family in Timaru, all of whom I don't see often enough so it really was great to see them.

Arrived home about 6pm yesterday to another flurry of aftershocks, there are more cordons up around town and plenty of police directing traffic. We missed most of the aftershocks due to being down south (and I'm glad about that - particularly glad that I wasn't in town or in a mall when they hit!) but there were a couple of goodies last night which had me waking up in a hurry.

I have the next couple of days off work and I'm really looking forward to taking it easy (ha! Like that will actually happen with the garden looking the way it does), or more likely being lazy.

Hope you are having a good summer/winter break, wherever you may be.
at 09:11 3 comments: 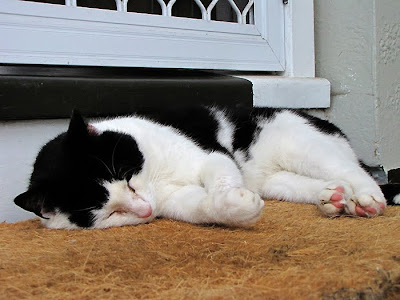 Sleeping on the doormat. No, of course you're not in the way there, I can step quite easily over you balancing a basket of laundry and the hedge clippers! It's especially fun when you jump up and try to go in the door while I'm closing it, balancing said objects!

To be fair, it was 28 degrees C. I couldn't be bothered moving much further either.

*Usually followed up by Annoying Cat Behaviour #1358 - sharpening claws in the screen door while wailing to be let in or out. 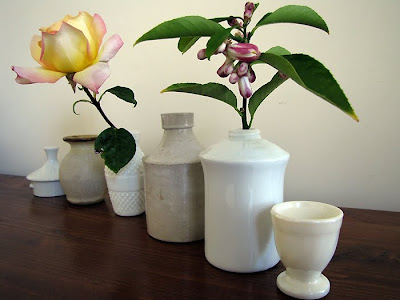 I've been meaning to post here for a while. I've even had these photos uploaded for several days. But I've been rather busy and tired, and I've had to have early nights because it's getting hard to pull myself out of bed in the mornings. We are shifting to a new location for work this weekend (after being displaced by the earthquake), so a final weekend of hard yards is required and then no more double bus trips! No more getting out of bed before the breakfast radio hosts have even come on air! No more cold, rattly, stuffy, poky, inconvenient work building. Hooray! 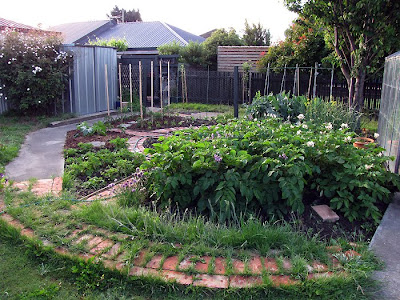 So, here's the potager in the early morning light a couple of weeks ago. No, I still haven't laid that last brick path. Potatoes are growing madly in the foreground and you can see the tomato stakes over by the shed.

At the moment I'm harvesting broccoli, rocket, lettuce, pak choi, peas, strawberries, potatoes, various herbs and spring onions. Annoyingly I had to buy a punnet of spring onions to plant out, as I forgot to sow seeds in time to replace the ones I've just about finished harvesting. I got into such a good pattern last autumn, but over winter they all slowed down and came ready all at the same time and I was too busy picking them to think about sowing them. I've let a few go to seed so I'll have some more to sow later. 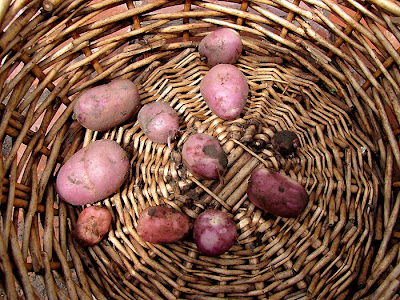 This is the first potato harvest! It doesn't look like much but I was thrilled with it. These are Heather. I sneaked these out from under a few different plants as they started flowering - apparently this is known as "bandicooting". I'll wait till the flowers die down before I harvest the rest - in the meantime the Swifts are ready. 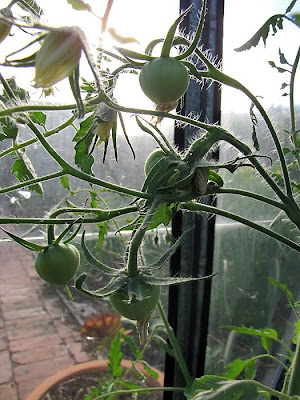 In the glasshouse the tomatoes are working hard. This is Sunset's Red Horizon. The photo is out of date already - the fruit are probably about the size of golf balls now. Still stubbornly green though. Most of the glasshouse tomatoes now have green fruit. Sunset is in the lead, followed by Arctic, and Amazon Chocolate is growing a big mutant fruit formed from several flower heads. 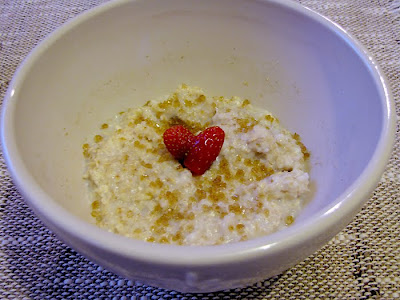 This cute heart shaped strawberry was fun to eat, but makes me a little sad now. I have strawberries in baskets in the glasshouse, and I also had baskets in a wire plant stand outside the front door. Someone stole the plant stand, and the strawberry baskets, on Saturday night. I went out to water them the next morning and they were gone. Nothing else was taken - not the potted blueberry bush, any other pot plants, or the wooden chair - which makes me think it was planned. Someone had probably walked past, seen the strawberries and decided to come back later and help themselves. The planter was top heavy, so they would have had to remove the baskets to carry it out. The fact that it was so obviously deliberate really annoys me... I would almost rather have found the baskets spilled on the ground, then I could put it down to some drunken idiot rather than a cold, calculated thief. It also annoys me that I can't have pretty things outside my front door (which is set back quite far from the street), without some loser thinking they have the right to just come along and take them. There's obviously a plant klepto on the loose in my neighbourhood... maybe it's time for me to get a dog, or some killer chickens!
at 20:59 9 comments: