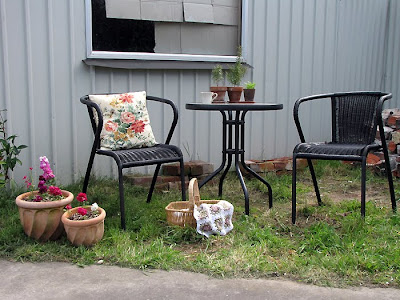 This post is almost a week late. It's been on my mind all week, I've even had the photos uploaded, but I've just been too tired to actually write it! But after a nice relaxing weekend at home, I can finally sit down and show you what I did last weekend.

I took the crochet outside to my "seating area". (Formerly brick storage area - but I heaved them all to one side, put in a couple of pots of colour and decided to ignore the dandelions.) As for the crochet, I was wishing all along that I'd gone with one of the suggestions offered in the comments of the last post instead of what I had planned. My idea was great but it began to develop an annoying and unintentional ripple, so I ripped it out and restarted three times... Urgh, lucky the surroundings were so peaceful and calming! (I'll show you what I made soon - ta-dah post coming up!) 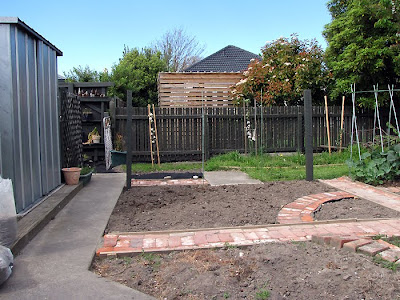 From my seat I could see this view - the part of the garden where I'd spent the previous days laying the curved path, then digging over the bed. I also built a fence for beans to climb up. 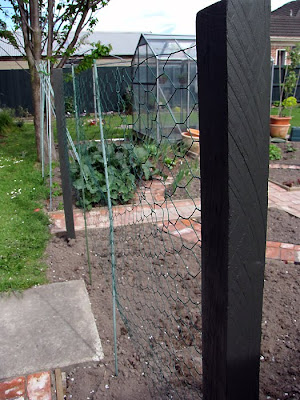 Here's a better view of the fence. I'll plant my pink-flowered runner beans here, and some cannelini. 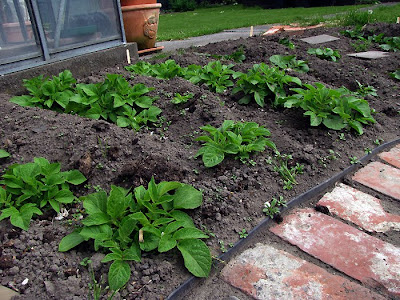 Here are the spuds before earthing up. I'm growing Swift, Heather and Desiree and I have some Karuparere that I really really need to get into the ground... 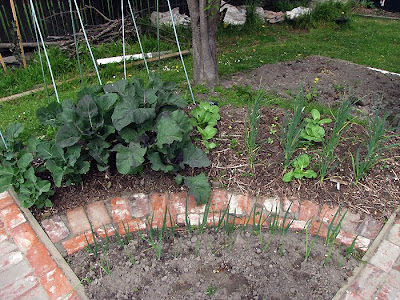 The most established corner of the garden - broccoli, pak choi and garlic at the back and spring onions in the front. I've since sown a row of carrots in front of the spring onions. 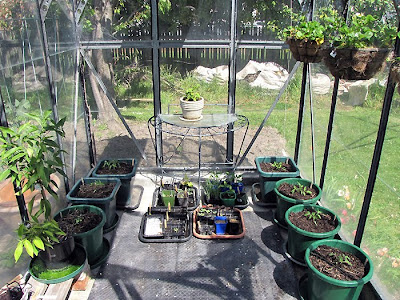 I put the glasshouse tomatoes into their pots on Labour Day. The rest are still in punnets and will wait another few weeks before I put them outside. The strawberries in their hanging baskets are doing well - I don't think the first ripe one is too far away! 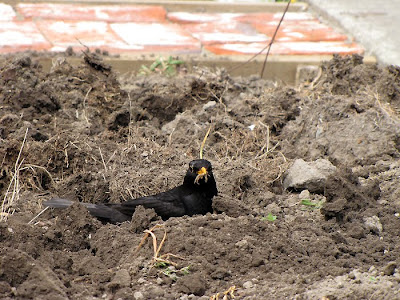 This little blackbird has been turning up lately whenever he sees me digging. He gets himself a tasty lunch that way! He is quite fearless and likes to make a point of coming up really close behind me. 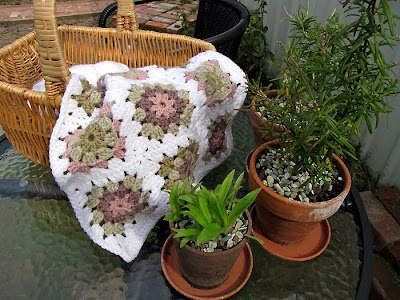 So that was last weekend. This weekend has been nice but not so photogenic - I've mostly been weeding, and digging up the garden to lay bricks for the last quarter of the circle path. I'll be so glad when that's done!
at 20:55 1 comment:

Crochet and my favourite tree 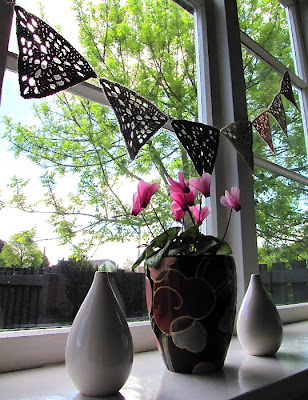 The big tree outside the lounge window is leafing up. I don't know what kind of tree it is but it's my favourite - it has small and slender bright green leaves in summer, which change to a glorious yellow in autumn and then drop off, just when the sun is getting low enough to shine through the window again. It shelters rhododendrons at its feet and the bird feeder in its branches. All in all a very considerate tree. 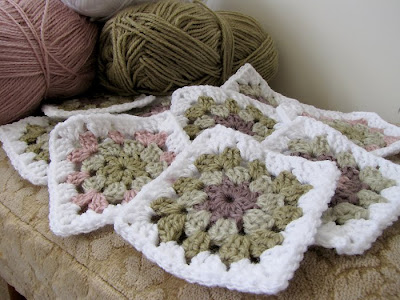 Here's what I've been working on at night lately. These little granny squares are quick and easy to make. I can even get through two on a good night, if I haven't spent too long wandering in the garden (as my wind-down after work) or wandering in blogland.

The pattern is called Summer Garden Granny Square, from Attic24. 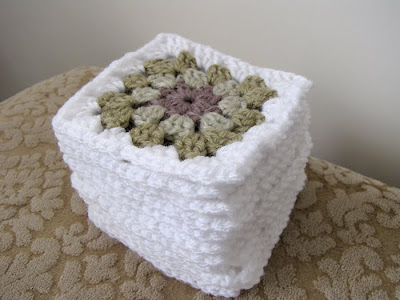 They are all ready to be sewed together into something pretty... anyone want to guess what it is? Hint... not a blanket!

I'm so glad it's the weekend, I'm really looking forward to some quality pottering time in the garden, and hopefully getting this crochet project close to being finished. I'll share pictures as soon as it's done. What have you got planned for this weekend?
at 20:28 2 comments: 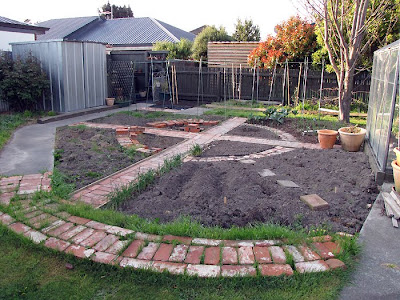 I had some quality pottering time in the garden this weekend. Above is the potager, half completed. The right hand side is done... the circle paths are laid and (most of) the ground is planted. I have potatoes in the big patch closest to the camera, and chives alongside the central straight path. I know, they look like overgrown grass, but that's only because the overgrown grass growing over the unlaid brick path is making you think that! Once I get those bricks in and the grass tidied up, the chives will look charming and rustic. 'Kay?

Basically the whole left side is still unplanted, because there's no point doing that yet when I'll be trampling all over the whole thing putting the paths in. (The bricks are laid out on top of the ground, but not yet set in.)

Anyway. See back in the corner of the property behind the shed? That's my new potting corner. It's been designed to be home to all the useful but unsightly, or currently un-useful, things that don't fit in my shed. 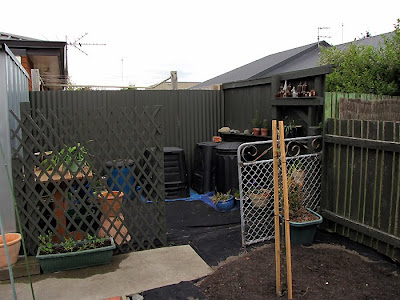 In the bottom right hand corner is my apple tree "Baujade". It will hopefully screen that area off even more as it grows. Weeds are a major problem in this area of the garden (especially the dreaded convulvulus and oxalis) so I covered a lot of ground with weedmat. Around the apple tree I spread some dirt and sprinkled grass seed and a few wildflower seeds. If it looks like the picture in my head, I'll have a romantic mini-meadow here.

I've got some sweet peas growing in front of the trellis which will help with the screening too. When I put that trellis up, I was imagining hanging bunches of garlic and onions up to dry on it in autumn. Looking forward to that day... 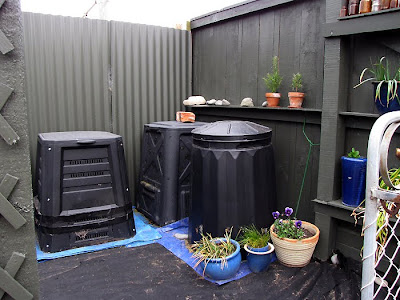 Here are my compost bins. I just love making compost! The act of literally turning rubbish into a product that you usually pay money for really appeals to me, and it's such an easy thing to make. I have three bins so I always have something to be added to while the rest is brewing. I put my compost bins on tarpaulins to stop vigorous weeds from growing through. 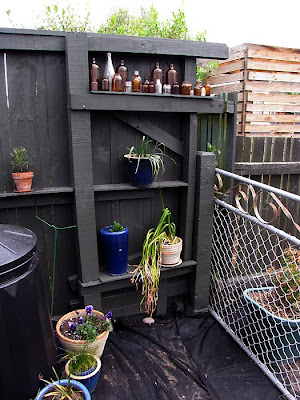 This area is also a graveyard for spent bulbs, where they can gather their energy to bloom next season. The green metal stick on the left is my compost turner. It has sort of a corkscrew at the base and as you turn the top it burrows into the compost, which makes it easy to stir and turn. 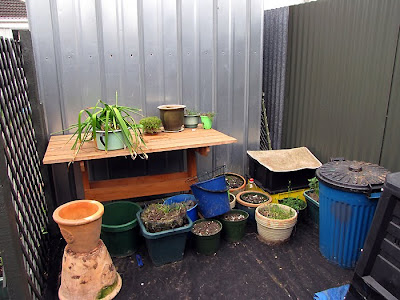 This side still needs to be organised - I'm going to put a shelving unit up to tidy up all those pots. Then I'll actually be able to reach the potting bench! 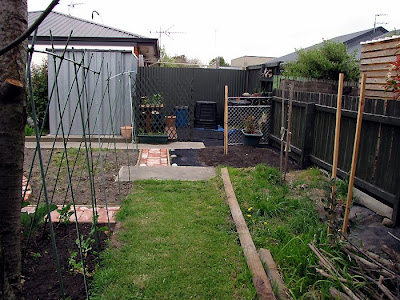 This is a sort of avenue, or it will be once the trees grow! There are 2 apples and a feijoa. 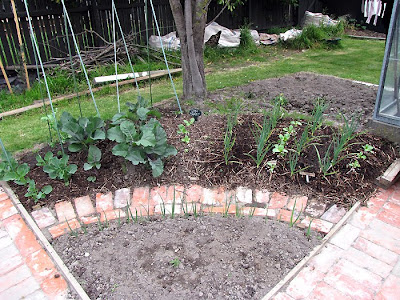 Here's the part of the potager I've got planted up - from left to right are green broccoli, purple broccoli, pak choi, and garlic interspersed with some pak choi. In the small wedge shaped garden at the front is a row of spring onions and a tiny little rosemary cutting. I haven't quite decided what else to put here but it could end up being herbs.

This post was brought to you by the letters p-o-t... as used in the words potager, potting corner, pottering, compost and pots. And that makes me think that I've spent a bit too much time thinking about this post and it's time to go sautee some leeks for tea.
at 16:41 6 comments: 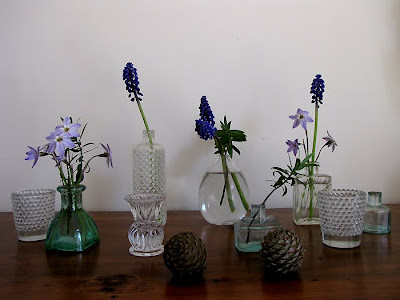 When flowers are abundant in my garden, I love to pick them and scatter them in vases throughout the house. I put them in places I'll be sure to see and smell them... the hallway table, dining table, kitchen windowsill, beside my bed. If I get a particularly nice bunch of something gorgeously scented, I've even been known to carry it with me from room to room. But basically I'll pick anything that's flowering or looks interesting... parsley, branches from shrubs, seed heads... it's all good!

Above is an early spring display. I just adore the look created by grouping several glass vases together and filling some or all of them with flowers. It's harder than you might think to create a good grouping of vessels though and mine still looks a bit sparse, so I think a bit of second hand shop trawling might be called for to find some more little bottles and things. 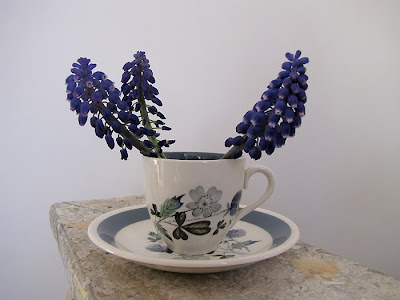 This cute little espresso cup is my favourite vase at the moment. 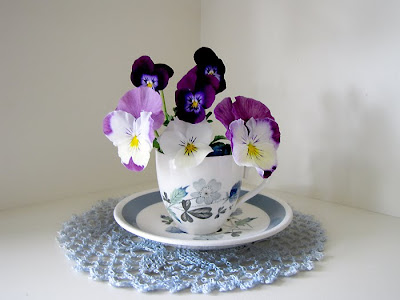 Here it is again with some pansies. They surprised me and lasted several days in the water. 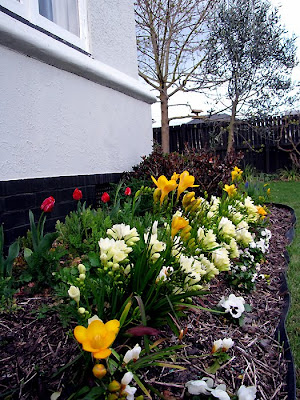 My neighbour gave me some freesia bulbs and I planted them in my front garden. Behind are some poppies ("angel wings") and some tulips which I thought were going to be pale pink, but turned out red. The yellow freesias were also a surprise, but they became my favourites because of the long graceful stems and elegant structure. 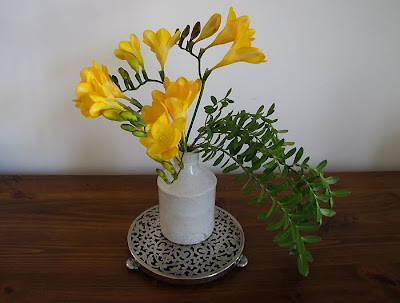 They look so pretty in a vase, and smell divine too!

I just came across a new blog dedicated to sowing, growing and arranging flowers. Have a look at Flaming Petal for lots of inspiring ideas (there is also a seed giveaway on!)

How is your flower garden looking?