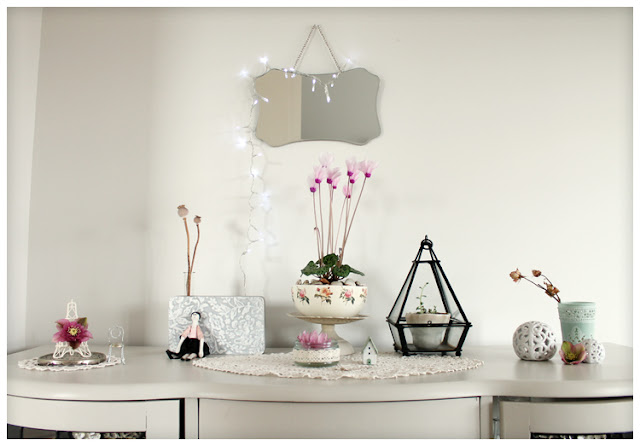 Welcome to my Styling the Seasons post for July! I took these pictures a couple of weeks ago and when I went to edit them, I didn't like them at all. So I reshot last weekend from angles I was happier with, and came out with some useable pictures! Bonus: the first of the season's hellebores were in bloom so I was able to use them as well, to my delight.

I've styled the top of my china cabinet again. I see this vignette often as I'm passing by so I like to keep it fresh by changing it up. As it's so dark this time of year I added some fairy lights to the mirror which help to illuminate the display... they are LED lights so shine brightly day or night! 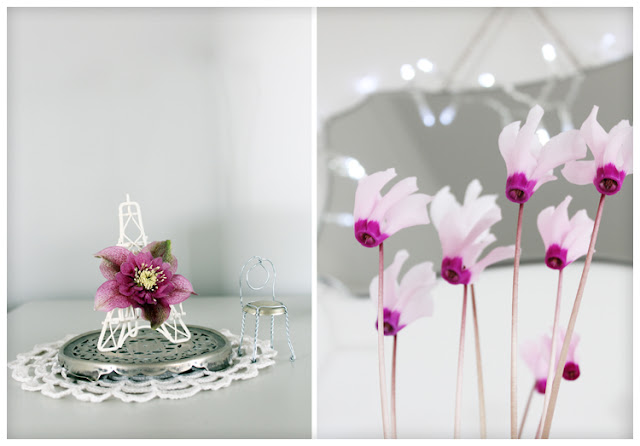 The little Eiffel tower display stand was the perfect place to show off this Tutu hellebore. The purple tones in the hellebore petals pick up the purple centres of the cyclamen blooms. This cyclamen is actually one of my favourite things about winter, it flowers so strongly for months and makes a beautiful centrepiece right when I need to be uplifted! 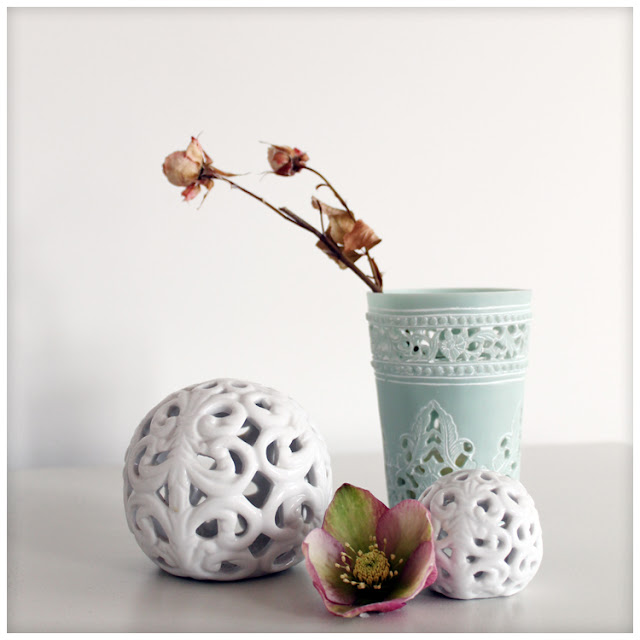 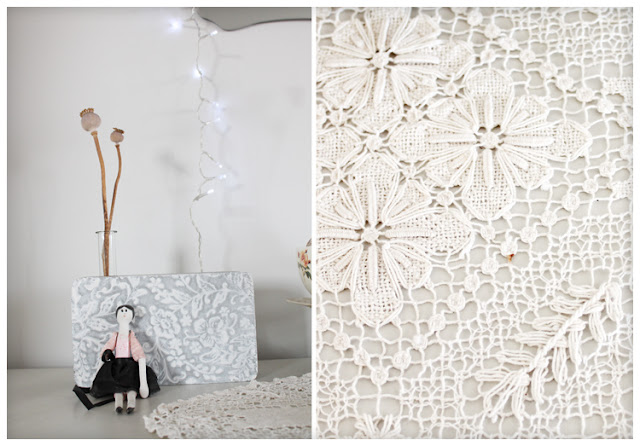 I love lacy patterns and I've used a lot of them here. The filigree patterns in the ceramic balls and candle holder, the lace patterns on the solid vase holding the test tube and then the doily. I've probably shown it before because it's too pretty to leave in a drawer and so it's been on top of this cabinet for a while... not sick of it though! 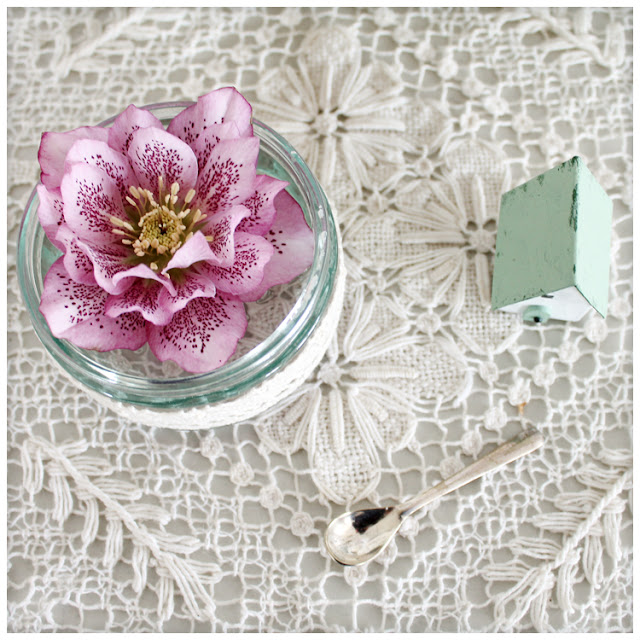 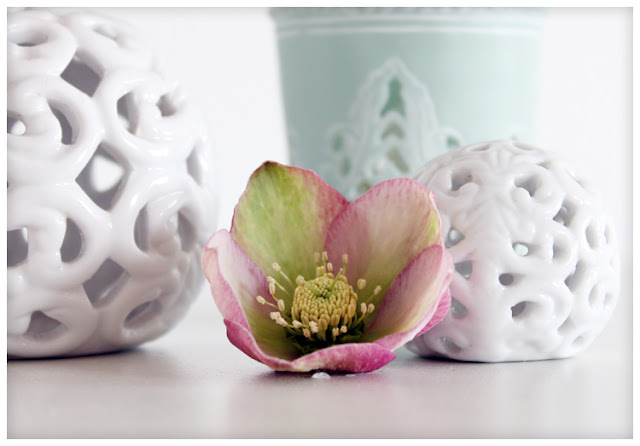 Here are another couple of beautiful hellebores. The top one is a double hybrid that is new to me this year, I just love the pink ruffled petals and the freckles. I'm going to try breeding my own hybrids by crossing it with some of the other colours I've already got. 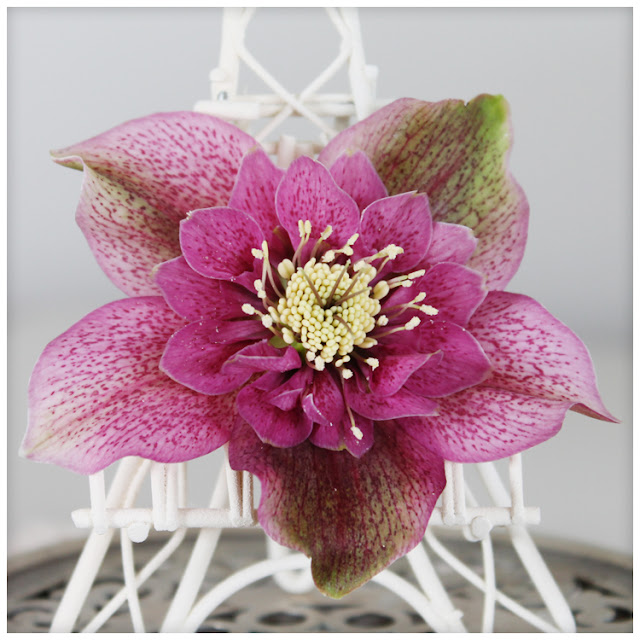 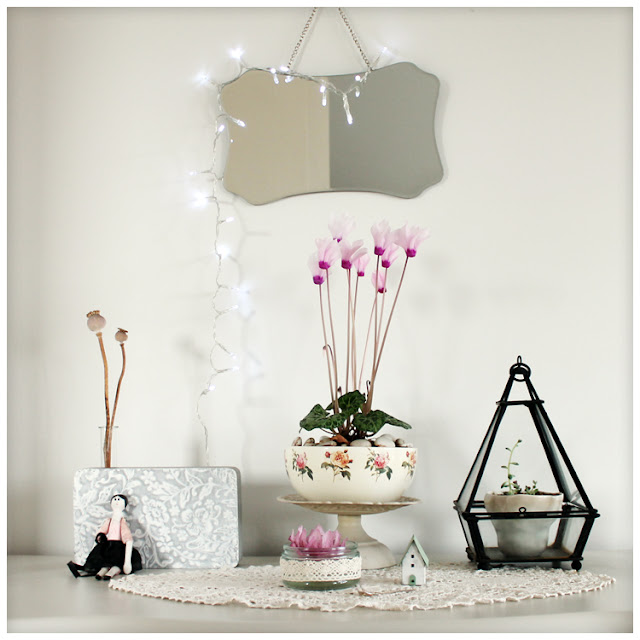 So that's it for July, the depths of winter. I've brightened my space with lights and flowers and I hope reading this has brightened your day a little bit too!

Styling the Seasons is a monthly styling challenge hosted by Katy at Apartment Apothecary and Charlotte at Lotts and Lots. Find out more by searching the hashtag #stylingtheseasons on social media.
at 19:53 3 comments: 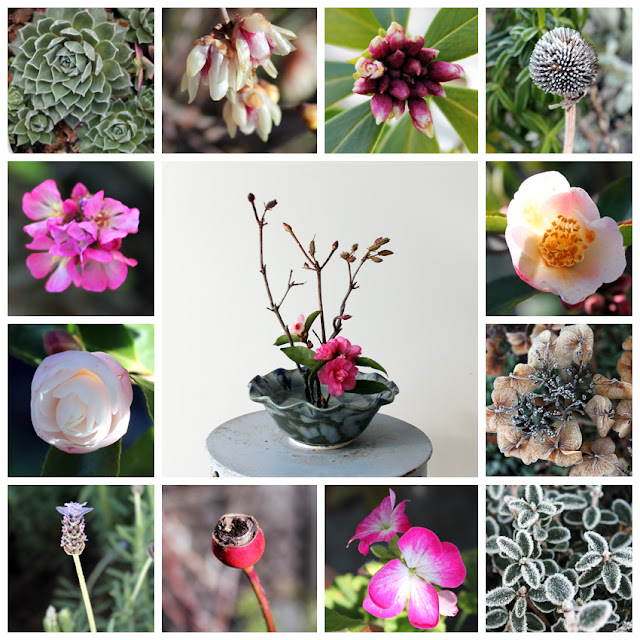 Welcome to July in my garden! Winter weather has set in and it's been incredibly cold. No snow I'm happy to report, although there have been a couple of storms with sleety showers. But we're well into the frosty mornings and it's been the norm to wake up to minus two or three degrees, and even -5 has not been that unusual lately. Frosty mornings are standard for winter in the South Island of New Zealand, however we have had a lot of heavy frosts lately (and the last two winters were milder than average) so it's feeling pretty damn cold!

My garden is noticing it too. Usually at this time I have something in flower that I can pick, such as pansies, borage and rosemary (I often use these edible flowers on cakes in winter!) but the pickings are very scarce this year. All the borage have succumbed to frost, the rosemary buds are barely showing, and the pansies are hiding their faces. This time last year the first of my hellebores were opening, as was the daphne and even some early spring bulbs. This year the buds are still tightly furled. Luckily I still have camellias and wintersweet to fill my vases... although I am starting to crave a bit more variety. 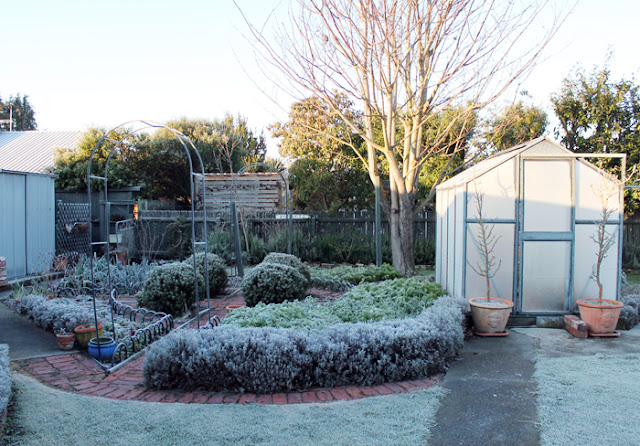 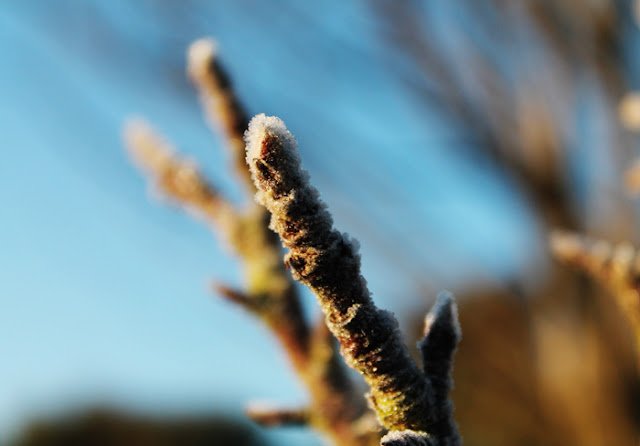 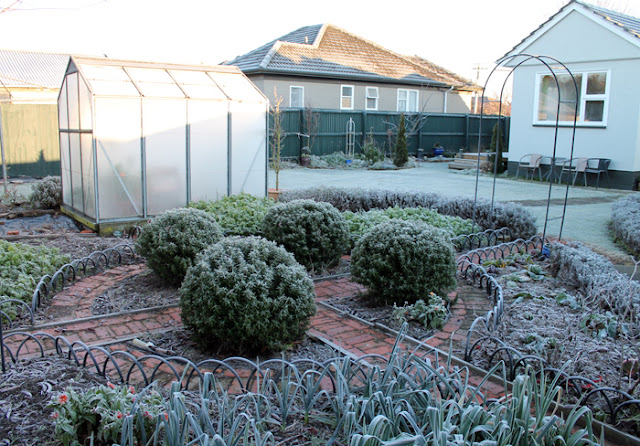 Here are some photos from one of our -5 degree mornings. It's a very invigorating way to start the day... quite refreshing! (Have I convinced you? I haven't convinced myself!) Oh well, at least everything is reasonably tidy and will stay so as long as it's too cold for weeds to grow! Just as well because there are still plenty of other jobs to do, like pruning the roses. Guess I'm not quite ready for spring then! 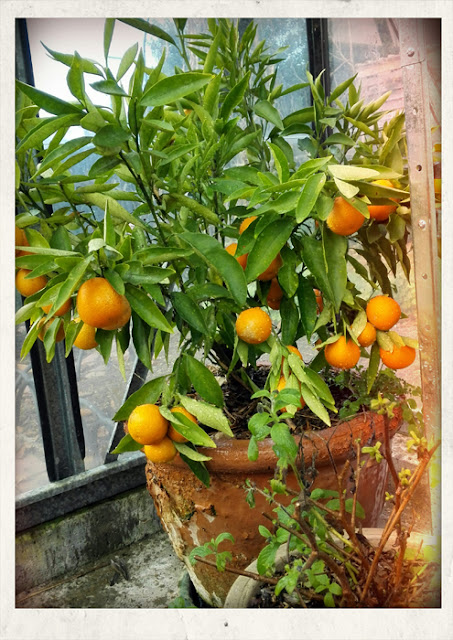 Today I want to quickly talk about my mandarin tree. This year it's done better than ever before, loaded with little fruits that are lovely and juicy! I've had the tree for five years now and I'd almost given up on it. I'd actually decided that it wasn't worth the space it takes up in the glasshouse and considered dumping it, but during the spring and summer I decided to give it one more go. Instead of tossing it I cosseted it, giving it plenty of water and even remembering citrus food. I kept its pot weeded and its stems free of scale. And now I've been rewarded!

This variety is called Clementine. The fruit aren't as big as the ones in the shops but they are juicy, and sweet with a bit of tartness. Easy to peel, and seedless since there aren't any other citrus nearby to fertilise them. In winter I often eat lunch in the glasshouse if the sun is shining, and a lovely fresh mandarin is the perfect end to it! In fact I've never felt better than I do this winter and the fresh vitamin C must have something to do with it.

It also looks pretty in my glasshouse (and is getting too heavy to shift!) so I'm calling it a keeper! Do you have any winter stars in your garden?
at 20:15 4 comments: 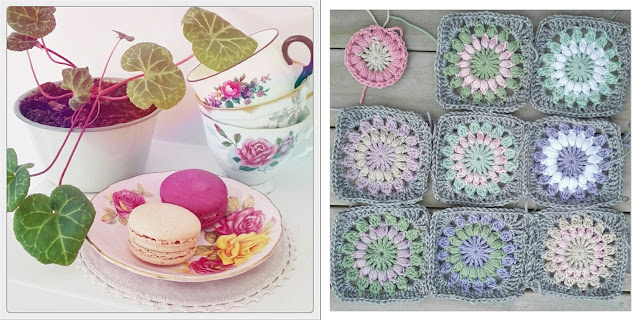 Well, June passed by in a blur! I've spent a lot of time indoors and it's been kind of nice to have a break from the garden. Of course on sunny days I still like to go out and see what's changed, but it's almost nothing at this time of year so I haven't felt too guilty about my little break. I have started a new crochet project and I'm loving every minute of it, from choosing the colours to designing the squares to planning the finished project. These pastel squares were my first colour swatches.

My workmate gave me macarons as thanks for helping her with a project. I enjoyed them for afternoon tea one day... after instagramming them first like any good blogger would! A basket of colourful possibilities. And part of my winter book stack which had to be returned to the library. We Were Liars was very good and I also liked Shine. 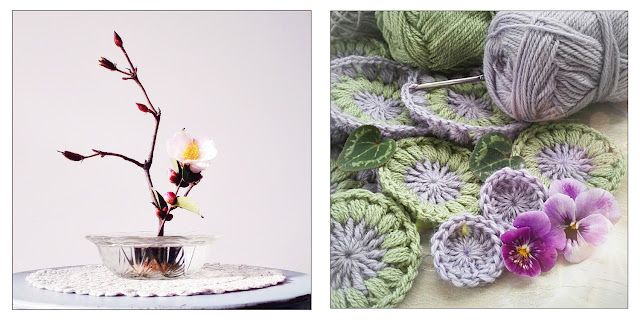 I made some little ikebana arrangements. This one has azalea branches and a sprig of camellia. And here are some little crochet circles, purple and green, like pansies and cyclamen leaves. 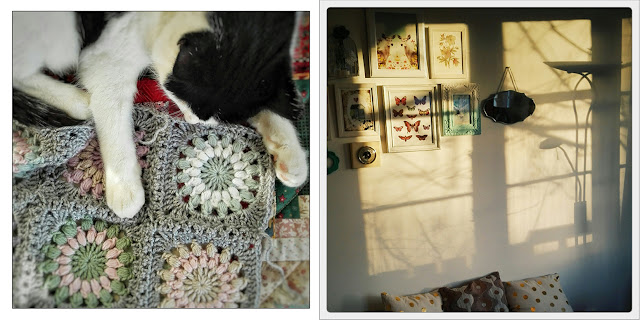 Mr Lui approved of my swatch! He sleeps on the couch which gets the late afternoon sun. The low light shining through the tree branches casts interesting shadows on the wall, especially when the bird feeder is full and there are fluttering shapes darting everywhere. 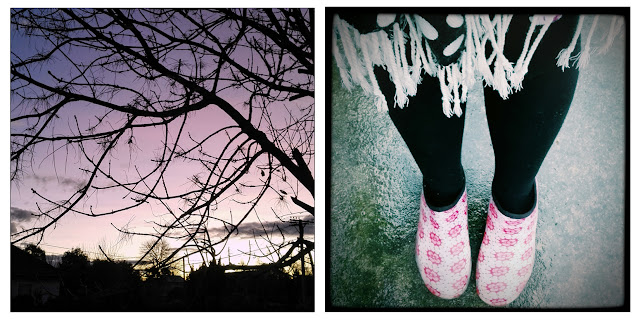 I'll end this post with a sunset pic, they have been especially beautiful lately. We've also had some cold nights, frosty mornings and wet mornings. Despite that, winter hasn't been so bad... I'd actually go so far as to say I've been enjoying it!
at 22:20 4 comments: