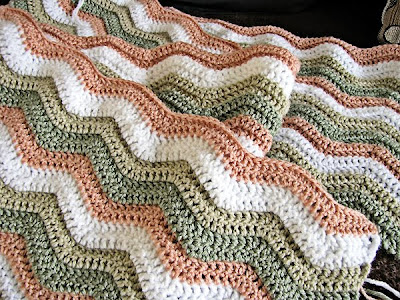 This is one of many current projects... a ripple blanket. The pattern is from Lucy at Attic24 and it's really rather fabulously easy to do. The stitches are basically repeats of 4 which makes it a good one for sitting in front of the telly, or when you're sitting at the computer waiting for the painfully slow internet to load. 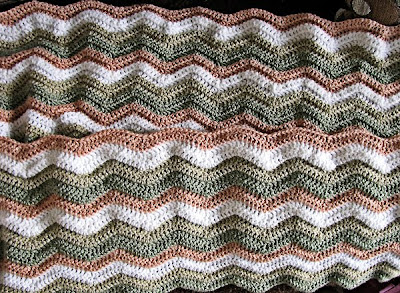 Sadly I've had to put this blankie aside to work on other, mostly Christmas-related projects. I've also been tackling the weedy garden. Yates Woody Weedkiller is said to work on convulvulus, if you mix it up in a jar and paint it on the leaves. You can also get a little plastic bag, put some solution in the bag, put some cut stems (preferably root) into the bag, and it will hopefully suck all the weedkiller into its roots and kill the whole thing. That is what I'm hoping for, organics be damned if it gets rid of this pest! 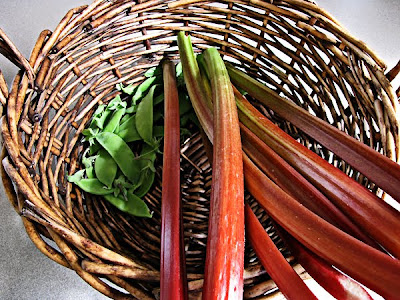 I'm getting a reasonable harvest these days - like this rhubarb and these sugar snap peas. The sugar snaps are going mad - I get a good double handful like this every 2-3 days. The dwarf massey peas are going well too (at least the ones in the container are - the ones in the garden were planted next to leeks which they didn't seem to like, and were very stunted in growth). I have green tomatoes on 5 plants in the glasshouse. At least in there they are protected from the cold northeasterlies which have been a constant part of spring this year. Broad beans are still going strong too (shame I'm sick of eating them.)

As for harvest duds - all the apples fell off as flowerbuds. One tree had one tiny fruit remaining, but after a while I noticed that it was brown and cracked. I think they were probably hit by one of the many late frosts we had. My pumpkins were slow to germinate and I had a low strike rate - I haven't grown them from seed before so I'm not sure if that's normal. The plants aren't doing much outside, again probably due to the cold winds and low temperatures.

Stay tuned, I have some more creative projects coming up to share, plus Lui has been acting weird (mind you, weird is normal for him) so there will be another Weird Cat Behaviour post coming up.
at 21:19 1 comment: 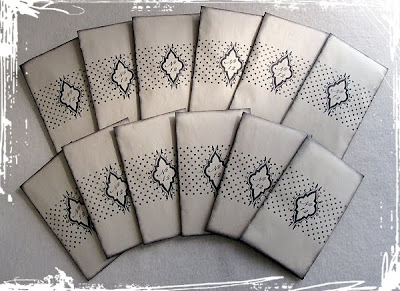 This year I'm again participating in the 12 Days of Chistmas swap. It's the fourth year the swap has been running so I managed to be a little bit more organised this year and started making my gifts in August! Then I put them aside for a while until suddenly the mailing deadline was upon me and they still had to be wrapped and photographed. A frantic weekend was spent doing that and I mailed them out. Now I'm just sitting back as the other gifts come in. 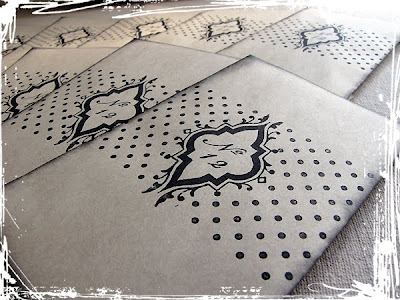 My gift will be opened on Day 12... that's Christmas Eve! So you will have to wait till then to find out what's inside. Until then, check out the 12 Days blog. From December 1st Lelainia will be posting photos of each wrapped gift, and from December 13th she'll be posting each gift as it's unwrapped. You can also find links to the participants' blogs and websites. You can also see photos of the previous years' gifties at my Flickr set.

Bringing the outdoors in 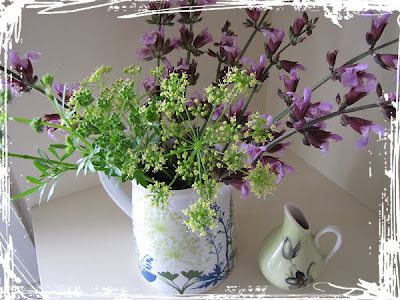 I love fresh flowers, and lately I've been making an effort to have at least one bouquet in the house at all times. I'll pick whatever's blooming, including herbs and veges which have gone to seed. The jug above holds purple sage and bright green starbursts of parsley. 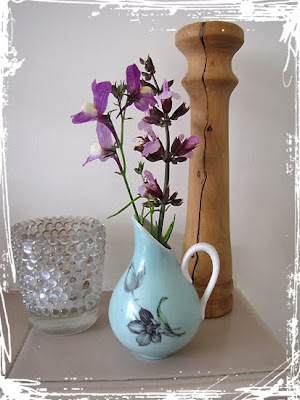 Dainty sprigs of sage and linaria are perfect for this little vase. 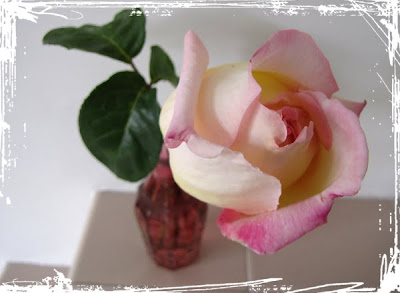 A lovely rose... the easiest cut flower of all! Just cut a stem with a bud and a couple of leaves, plonk it in a vase, and it will do all the work for you. It slowly unfurls over many days, and even spreads a gorgeous perfume. Even the fallen petals of a rose look beautiful.

A taste of summer 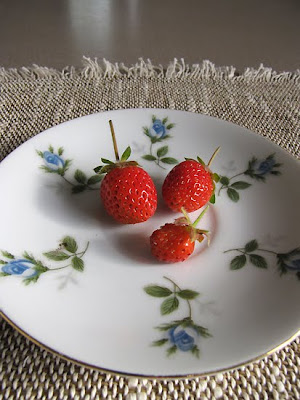 Can you smell them? Ripe, sweet and delicious. My first strawberries of the season, picked 15th November. These are from my Pink Temptation plants - the fruits are small but very sweet, and the flowers are pink. I have two baskets of strawberries in the glasshouse so they will ripen faster, and also be safe from the birds. Can't wait till I have blueberries to go with them...

I've been updating my Flickr and Ravelry pages. You can find me here at Flickr and here at Ravelry. 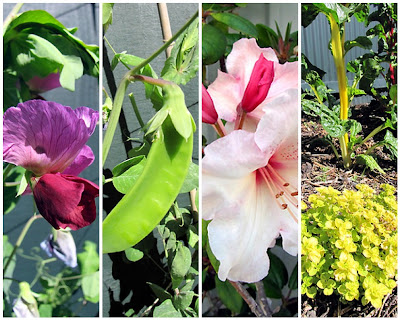 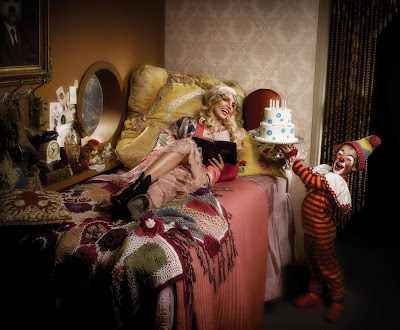 I don't have many good things to say about Britney, but check out the gorgeous afghan she is lying on here (click image to see it larger). It looks part freeform, part granny, and I love the mesh border with the tassels. In fact I love this room, even the midget with the cake would be handy...
at 19:48 1 comment: 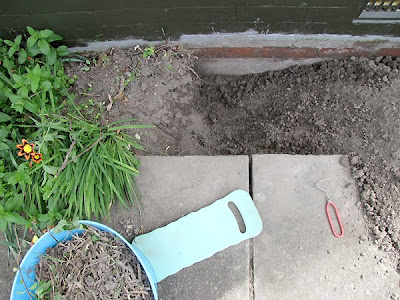 Mint, mixed in with bulbs, a large fern, and something unidentified growing from a dense mass of white rhizomes. I'm hoping to get all this cleared out and plant the small garden with some heuchera.

Actually, this was just a small patch of weeding to ease me into it (I thought, 4 weeks ago, that it would be done in a weekend). There's also convolvulus going rampant in 2 different corners, plus a huge infestation of oxalis in the future potager. So. Plenty of weedbusting to be done. Does anyone have any tips for dealing with oxalis or convulvulus (bindweed)? 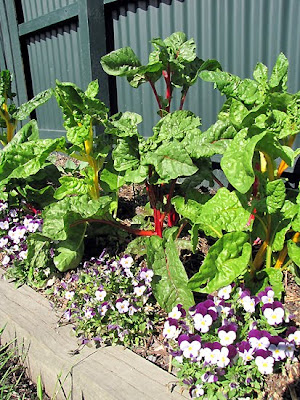 Things are going well in the vege patch though. My silver beet is going to seed, but according to Lynda Hallinan (editor of NZ Gardener), this tends to happen to silver beet in the middle of October, regardless of when it was planted. 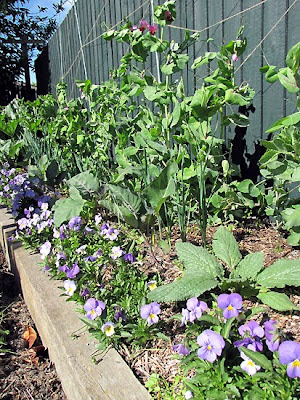 The Carouby (sugar snap) peas are growing tall and beautiful in the background. In front of them are leeks, purple cauliflower, borage and violas. I'm starting to thing I might have planted things a teensy bit close together. 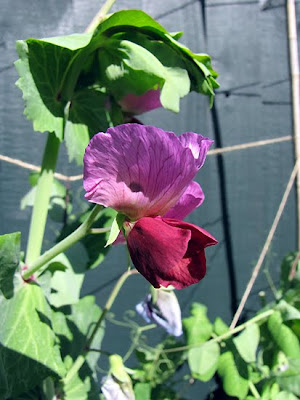 They have such gorgeous flowers, just like a sweet pea, but unscented. 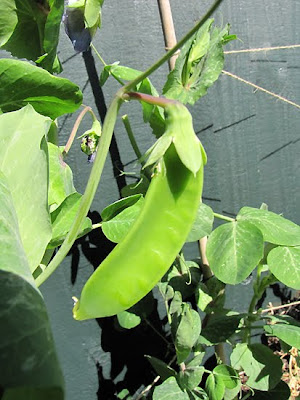 The pods develop super-quick - don't let them get any bigger, or they'll be stringy! 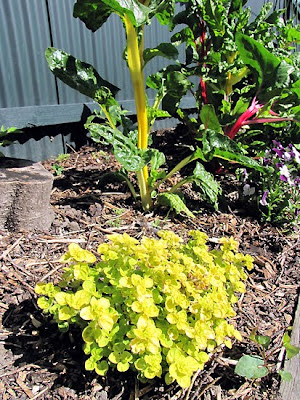 A radiant patch of golden marjoram. Next to it, my nemesis pokes one of its many heads through. I hate convolvulus. 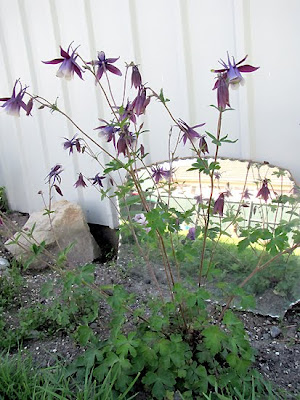 Aquilegia, next to a pretty scallop-edged mirror. 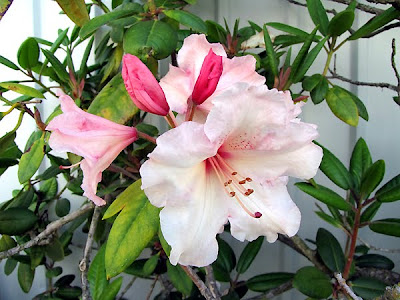 A blush-pink rhododendron... the flower of spring.
at 18:50 No comments:

In which Lui has a big adventure

Bright and early on a Monday morning, Lui sat looking out the open back door. Suddenly his ears pricked up and he leapt up, knocking over his stool in excitement, and ran out the door. What had he seen? Just two ducks, taking an early morning stroll across the rooftops. 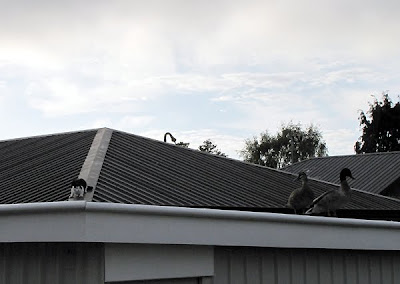 Full of eagerness and spring cheer, Lui leapt up on the roof to join them. "Surprise!" 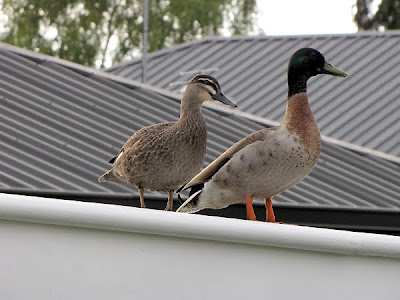 "Bugger off!" quacked the ducks, and flapped across the short space from the neighbours' house's roof to our garage roof. There they sat, regally surveying the landscape and ignoring the lashing tail and fanatical glare coming from just metres away. 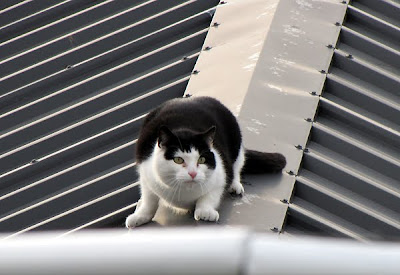 Poor Lui - he just wanted to cuddle one! Just one! He just wanted to wrap his paws around it and hold it tightly, and maybe wash it a bit, and watch it flap and then grab it close and cuddle it again. That's all! 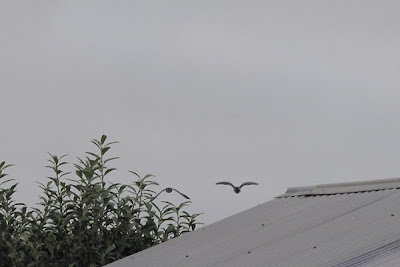 Darling, this neighbourhood isn't what I thought it would be. Let's go!

Right you are, dear. 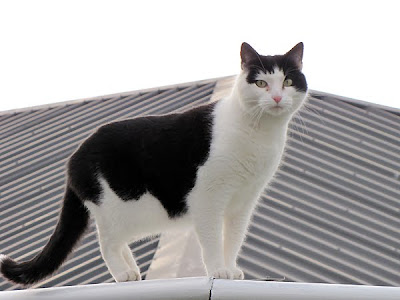 Oh well, thought Lui. I know how to get on the roof now! It's just a jump and a flap from here to the cherry tree. Those smart-ass blackbirds won't know what hit them!
at 20:20 No comments: