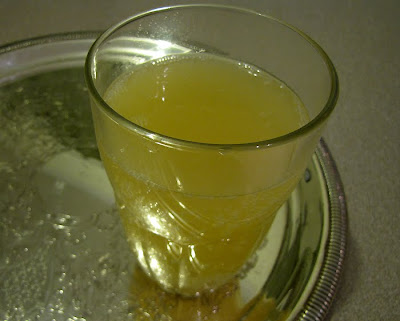 Tonight we decided to try some of the homemade cider. This was after hearing a "thump" from the cupboard, opening it and finding a bottle lying on its side because the bottom was so distended. So I figured it was probably fizzy. 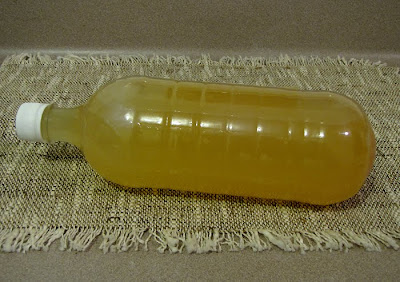 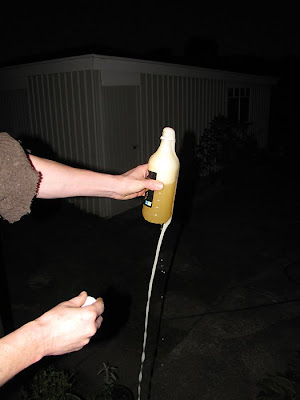 Jon did the honours while I stood well back while zooming in with the camera. Thar she blows! It's almost as good as a volcanic eruption! 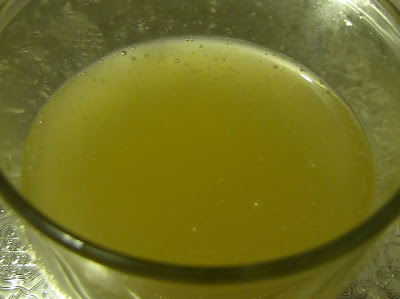 The verdict: surprisingly good! From the smell I thought it was going to be quite sweet and sickly, but it's a little tart and very refreshing. Also mildly alcoholic. I guess the rest in the cupboard will only improve with age (as long as the bottles don't burst...)

In other kitchen news I got a rice cooker. I've been searching out recipes and I'm quite keen to try making a cake in it! Last night I made pumpkin and sage risotto which was delicious and really easy. The recipe is here. A list of recipes at Recipezaar is here.
at 19:02 No comments: 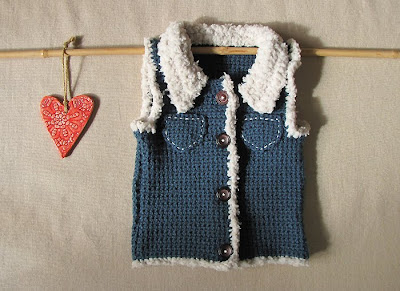 I finished this off recently. It was a gift for my new nephew Ronan, to go with the little ugg boots. The pattern is Vest Friend from Candy Babies. It was simple enough to work up, being all in sc, you just had to measure as you go because instead of "work 20 rows" it would tell you to work until it measured 20 cm. Also, the pattern had no fastening at the front, so I improvised the buttonholes... and even managed to get them to line up! The white yarn is the softest fleece you can imagine. I got it at a little yarn shop on the north shore while I was up there in February. Perfect for baby clothes!

I'm still listening to Podiobooks while I work, if there's nothing good on TV (ie most of the time). I listened to Shadow Falls, which I enjoyed. It was highly dramatic and a few of the actors were way OTT (one totally sounded like Stan from American Dad), but most were good and the story moved along well. Now I'm listening to Heaven - I'm one episode in and it's looking promising.

In kitchen news, I used up another batch of tomatoes tonight by making tomato paste. I roughly chopped them, added garlic, onion and some herbs (savoury and basil mint) and reduced it over medium heat for about an hour. I whizzed it with the stick blender and put it in the freezer in some muffin tins - when it's frozen I'll pop it out of the tins and put the chunks in a plastic bag. It will make a great base for a pizza.
at 20:40 No comments: 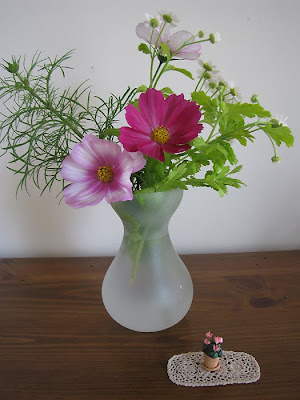 Autumn is here, which means shorter days. That makes my weekends fly by even faster than usual! I spend most of the daylight hours outside in the garden, working on my potager and trying to keep the weeds at bay in the rest of the garden, at least until I have time to deal with them properly (when will that be I wonder?) Photos will follow, one day, when it's finally nice enough for me to want to photograph it. 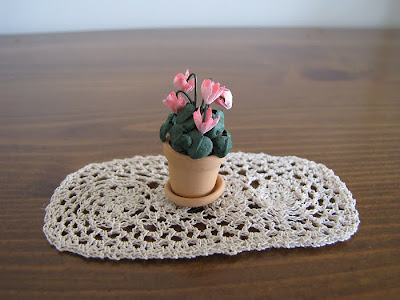 I'm also working on my crochet - I just made this little table runner. This is a miniature dolls house scale piece, it's for my tinyland house if I ever get it. It only took one evening to work up, though my eyes were screaming afterwards... 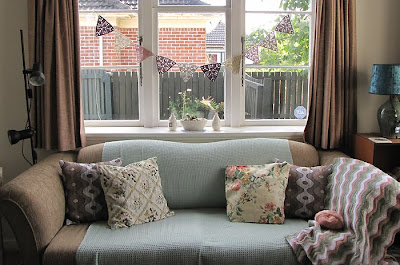 Here's where the magic happens... usually at night with the light of many lamps! The ever present WIP is draped over the arm of the couch there. It's big enough that I can now snuggle under it while I work.

The harvest continues - I'm off to the kitchen now to make another batch of kasundi.
at 16:23 No comments: