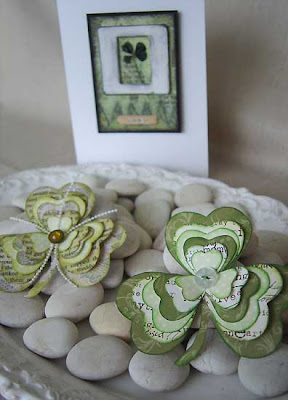 Happy St Paddy's Day! I never normally celebrate this day, but I have an Irish surname (O'Connor) and, since it's about the only bit of "culture" I have in me, I thought it's about time I did! Then the lovely Vanessa at A Fanciful Twist came up with these fun shamrock pins, and I knew what I had to do. 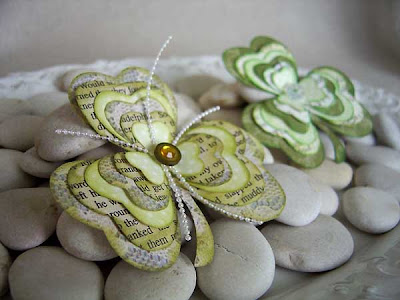 Vanessa's pdf is at her blog if you want the pattern to make your own pretty shamrocks! They are designed to be a pin but I found they work just as well as a table centrepiece. 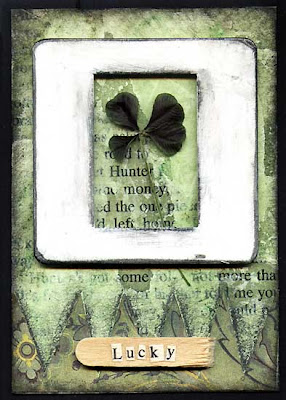 Hope this day is lucky for you!

A stroll through the hothouse 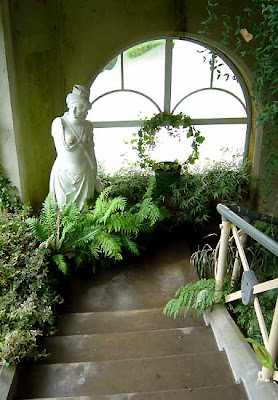 This is a corner of the hothouse at the Christchurch Botanical Gardens. I wish I had a similar nook in my own house! Although the humidity of this building is really not something to be desired. 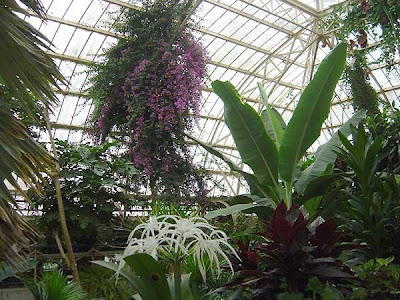 Up the stairs to the second storey, and look at that atrium ceiling! Look at the pink bouganvillea. 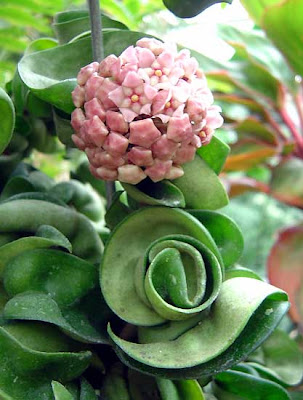 All around were samples of exotic, unusual and just plain weird plants. 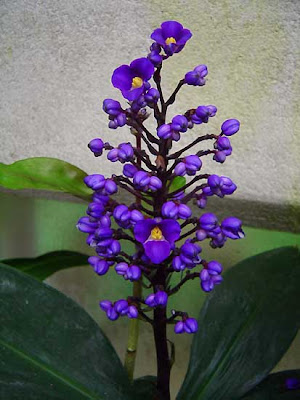 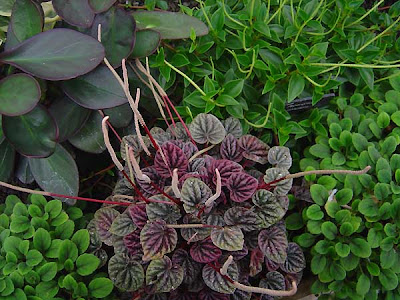 Pretty leaves and contrasting textures were all around. 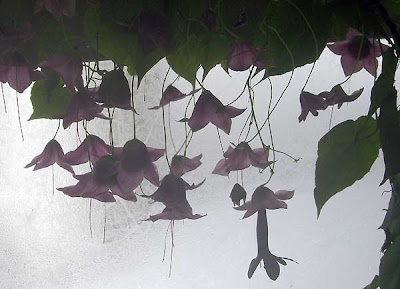 Here's a steamy photo of some Purple Bells. They were growing round a circular arch which you can see in the very first photo, and cascading from baskets hung from the ceiling, similar to the pink bouganvillea in the second photo. 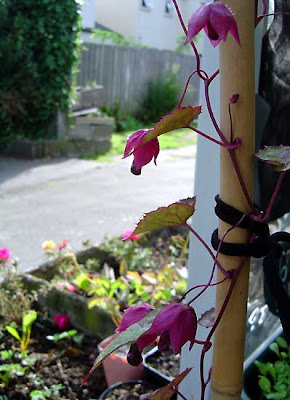 My Purple Bells at home have quite a bit of growing to do to catch up to their cousins!

These are only a few of the photos I took... more can be found at my Flickr page. Caren also has some photos here.
at 10:29 1 comment: 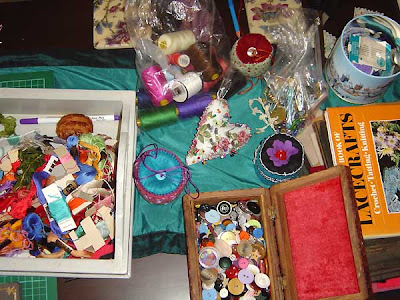 What happens when two creative girls get together for a week with no cares and no responsibilities? Well, you get an art mess of course. This was my coffee table on Monday (and I must confess, it usually looks worse than this) after Caren, myself and my friend Roseanne had a "Nana Craft" afternoon. Nana craft involves playing around with a new (or old) idea, while catching up with friends, having a chat and lots of coffee. On this occasion we made little felt pincushions and decorated them with buttons, beads and embroidery. 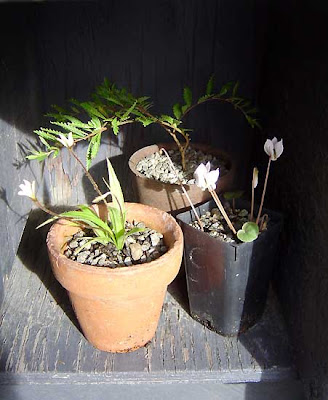 On Sunday after meeting Caren at the airport, we went to Riccarton market where I picked up these sweet little alpines in tiny terracotta pots. At the back is an Ulmus (miniature elm), left front is a hybrid rhodohypoxis and right front is a tiny white cyclamen which is probably the cutest cyclamen I've ever seen... I love all things miniature and that includes miniature plants! 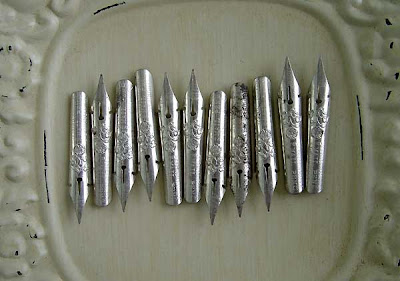 We also got a fantastic deal on these pen nibs. I've no idea what I'll use them for, but we couldn't pass them up. 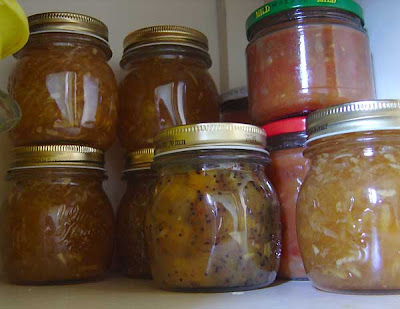 All right, so after the market fossicking and nana crafting, we got into the jam making. You might not know this, but jam making is one of those things where once you start, you can't stop, so I've ended up with three types of preserve in the cupboard (tomato relish, pineapple relish, and pear and earl grey jam) and two types in the fridge (blueberry jam and blueberry creme). I've also got an ever-growing pile of tomatoes sitting on the bench, just waiting for me to get some more jars so I can make more relish of them. 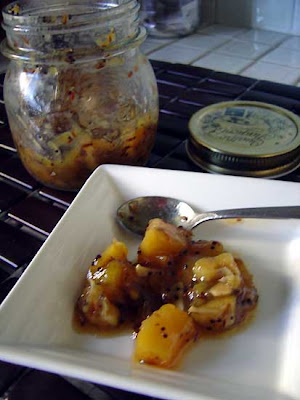 This is the pineapple relish and it's incredibly tasty! It has pineapple, lime, garlic, oregano, cumin, fennel and mustard seeds. Very good with ham sandwiches and probably roast pork as well. 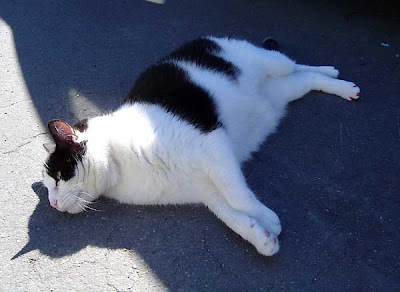 I have more to tell but I'll save it for another post. Here's a quick Funnelhead update: the Soft Paws nailcaps arrived and we put them on him today. Have a look at his back paw in the photo. See the red nails? Pretty! Lui seems to think so too - he hasn't tried to chew them off or anything. Yet! Keep your fingers and paws crossed!
at 16:29 1 comment: 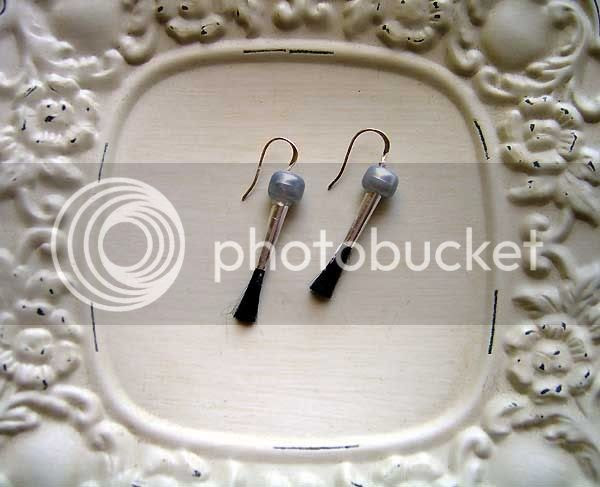 Remember the One World One Heart event? This is a prize I was lucky enough to win. These cute little paintbrush earrings are by Gemma at A Desert Garden. They are very appropriate since I have been attempting to work on some paintings this weekend. (I haven't gone so far as to dip my ear into the paint, although I have gotten my hair and sleeves into it.) Thank you so much for the lovely prize, Gemma!
at 16:00 2 comments: