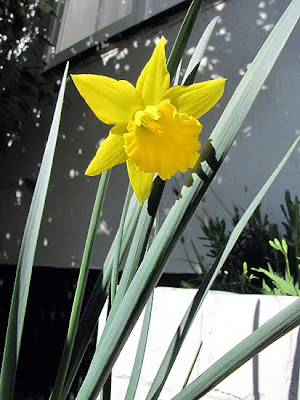 Spring is here, even if it's been a little slow to show it round my place! A lot of my bulbs have turned out to be in rather shady places so are taking a bit longer to flower than I would like. But this weekend I had the first daffodil - it's a miniature called Sundisc. I also have blooms on the camellia and one of the iceland poppies has decided to open. I can't wait for more of them to burst open, although I do love the funny little buds. 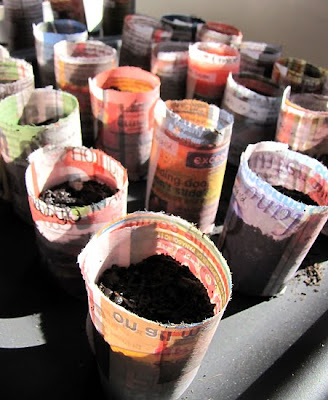 I couldn't hold back any longer so I cleared the table in my art room and got out my seed raising mix. This table gets full sun all day so it should be ideal for raising seedlings. So far I've sown onions, Black Krim tomatoes, marigolds, nasturtiums, and a cottage garden mix. Plenty more to come! 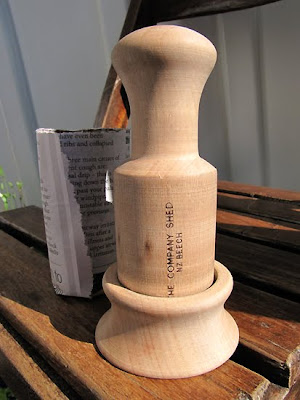 This is my seedling potter. You just get a strip of newspaper, wrap it around the barrel, fold the ends over and twist it in the base. Then you have a little pot made of newspaper that will break down quickly once it's put in soil - no disturbing the roots! I had started saving toilet paper rolls to use this way, but this is a lot better. You can get them from The Company Shed. 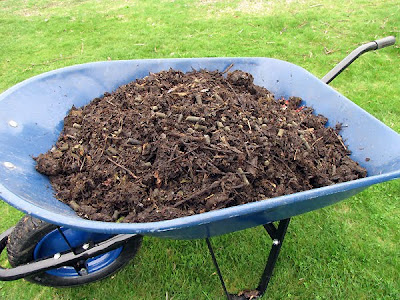 I've also started digging over the garden and adding compost. This is the first time I've done this and it's pretty exciting - especially since I'm using my own compost! The compost looks and smells like dirt (at least until I added sheep pellets) so I'm assuming I did it right! 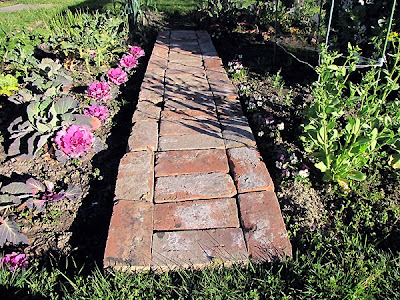 After that, I laid out bricks to see how a brick path through the potager would look. It looks awesome! Then I ran out of bricks. Hopefully I can get some more bricks soon, because I'm really feeling the itch to dig, plot, plan and organise the space.

Oops... this is the last post on my holiday that I meant to publish two weeks ago. I had the pictures uploaded and everything! I have been distracted by the springlike weather we've been having which makes me want to neglect my computer and spend all my time outside. But more on that later! 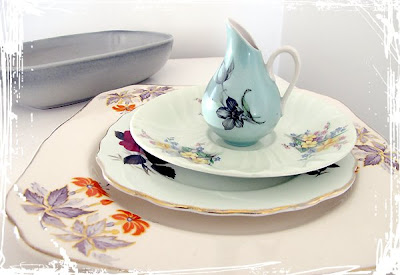 Anyway, these are some of the goodies found in various second hand shops around South Canterbury. As you can see, I'm all about vintage china plates and kitchenware at the moment. 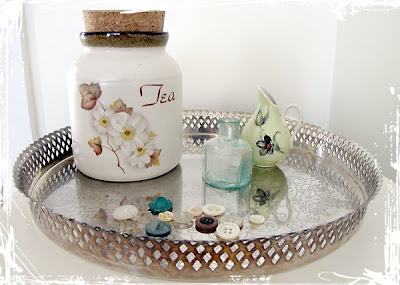 Oo I love this silver tray... I am having such fun setting up different little vignettes on it each day. The green vase is the twin of the teal one in the photo above. And that's a tiny selection of the buttons I picked up... lovely old buttons, some hand carved from shell, the tiny misshapen ones my favourites of all... 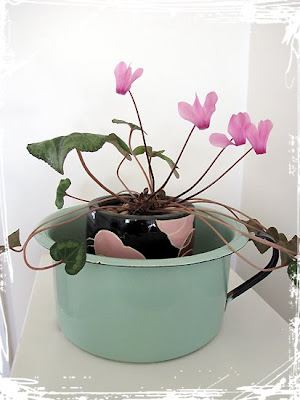 And I couldn't turn this down... a gorgeous pale green gazunder! I'll be using it as a planter rather than keeping it under my bed in case of emergencies... but good to know it's there right? 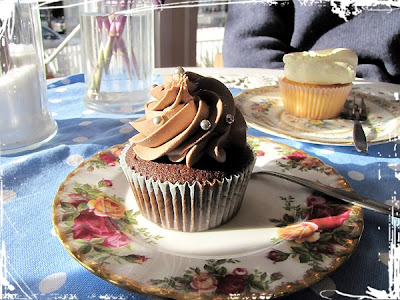 Mum and I made it our mission to try new and exciting food every day of the Christchurch part of the holiday. We began with afternoon tea at the Cupcake Parlour. See how pretty it all is... vintage china plates, Cath Kidston tablecloth, swirly icing and silver sprinkles. The cupcake was delicious, as was the icing - very rich though! There weren't many people eating in at the Cupcake Parlour, but there was a steady stream collecting takeaway orders. 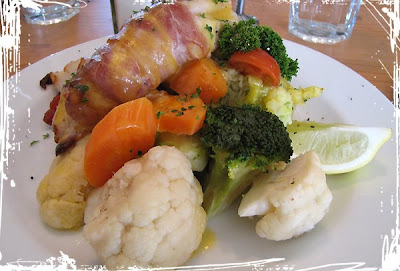 The next day we went out to visit Seagars at Oxford. It was incredibly busy - word has sure got round about that place. We arrived just after 12 and all the tables were full, so we were invited to browse in the kitchen shop next door until one became available. Five minutes later a waiter came and told us a table was ready, so in we went. The staff were great - really friendly and helpful. I was slightly less than impressed with my main though. I ordered the Oven-Roasted Monkfish which was supposed to be served with lemon hollandaise, potatoes and fresh greens. There were about three drops of hollandaise (to be fair, they were extremely tasty drops) and instead of fresh greens, steamed winter veg. However the veg were still crunchy, as demonstrated when I tried to spear a piece of carrot on my fork and it pinged away, bounced off my lap, landed in my handbag and wiggled all the way to the bottom. I think the monkfish was nice, but it was hard to tell because the bacon flavour was so strong. Oh - but there was a lovely mash, with potatoes and cabbage and maybe even parsnip, hiding under all those crunchy veges! 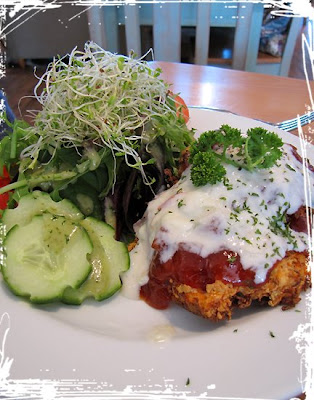 Mum had the Carrot, Cumin and Cashew Nut Fritters. She said they were nice but wouldn't rave about them. 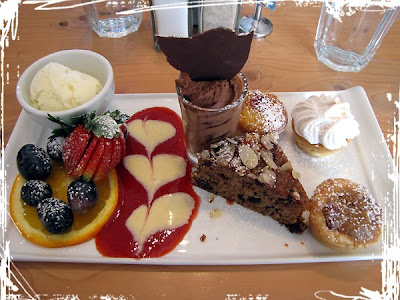 Fortunately dessert made up for it! This is the Dessert Nibbly Platter - a little bit of everything including pecan pie, lemon meringue pie, blueberry pie, fruit cake, chocolate mousse and ice cream. So good, especially that mousse, yum. 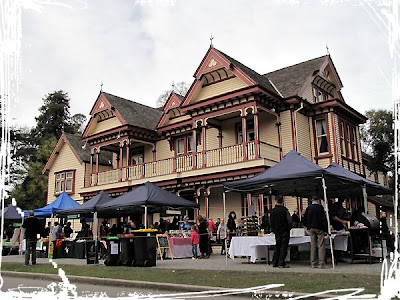 The next morning we went to the Farmers' Market at Dean's Bush, Riccarton. There was a fascinating array of handmade, organic and gourmet foods there. Handmade bread, cheese, chocolates, cookies, two different cupcake stalls, fresh meat and veg... I had a wonderful hot chocolate flavoured with Mayan Spice (chai spices and a hint of chilli!) which certainly warmed me up on a cold morning. I bought a goat's cheese fetta (Mum has a recipe for a leek and goat's cheese tart - which I am still waiting on, hint!) and... 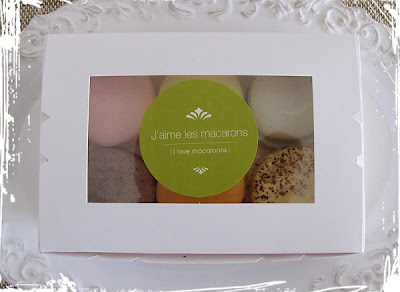 ...macaroons! I'd never seen these in real life before and I just had to try some. And yes, they are every bit as good as you read about. Soft meringue shells with a creamy ganache centre. 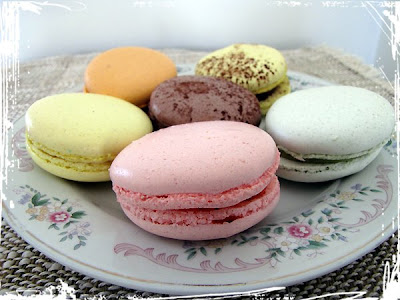 They are from J'aime les macarons (I love macaroons) - very appropriate name! (The one at the front is rose and it was my second favourite. My first favourite was the middle one - bitter chocolate.
at 17:18 No comments:

Last week I had a much needed week off. I spent most of the time with my mum - as we live in separate towns we don't often get to catch up and do things like go shopping or go out for coffee, so we decided to do as much of that as possible in one week. By the end of it, I was all shopped out and had eaten enough sweet things to last me the rest of the year (or so I thought yesterday - I still managed to force down a gingernut for afternoon tea today though!)

Food and shopping will come in the next couple of posts, but in the meantime here are a few photos from the first two days, which we spent in Timaru. 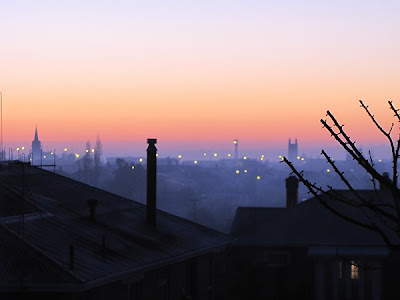 Timaru sunrise - taken from the window of my dad and stepmum's house. I thought how pretty and misty it all looked, but realised later that the mist is probably smoke from people's fireplaces (it was a completely still morning, and very cold at minus 2 - brr!) 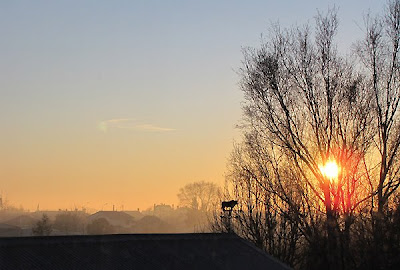 From the same window but another direction. 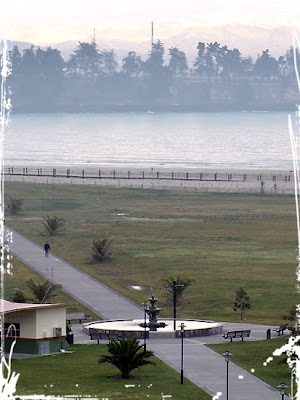 Caroline Bay. The haze was still there, as was a strange pinky/gold glow in the sky. It was like sunrise, but at 10.30 in the morning! 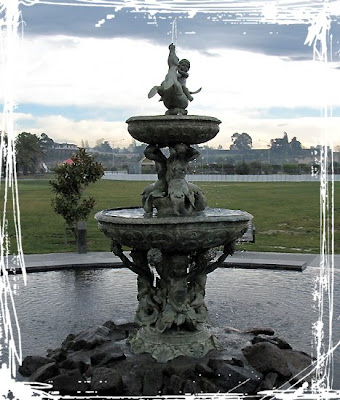 They have put a new fountain in a the Bay. It's an ostentatious, Victorian monstrosity covered with mermaids, twin-finned merbabies and a cherub riding some kind of seahorse. I love it! 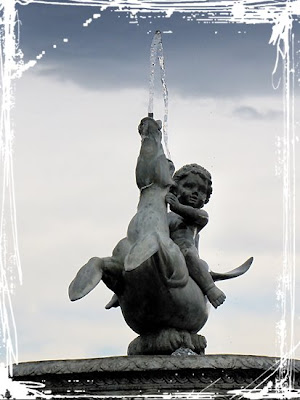 Even on a grey chilly day. 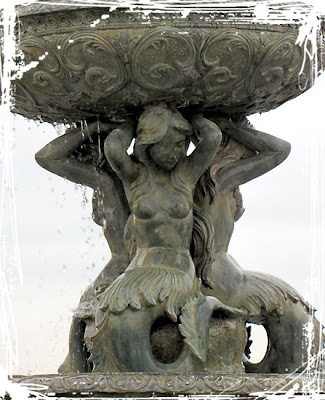 The lovely mermaids seem to be wearing frilly skirts of some kind. They don't seem to mind the water dripping in their faces, but I bet they are looking forward to summer and a bit of sunshine on their tails.

As am I! We were quite lucky with the weather though and that was the only grey day - the rest were sunny and warm, and were a welcome reminder that spring is not too far away.
at 15:40 3 comments: