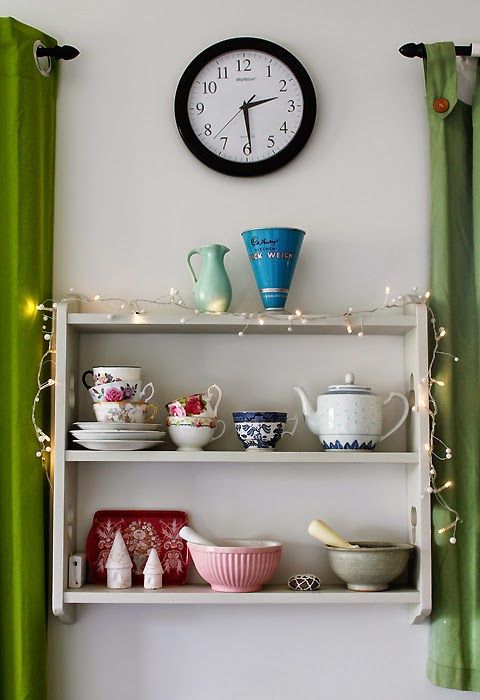 This post has been sitting in my drafts folder for a while waiting for me to find some words to put with it. I thought I'd better get onto that while it's actually still July! These are just some photos from around the house this month. 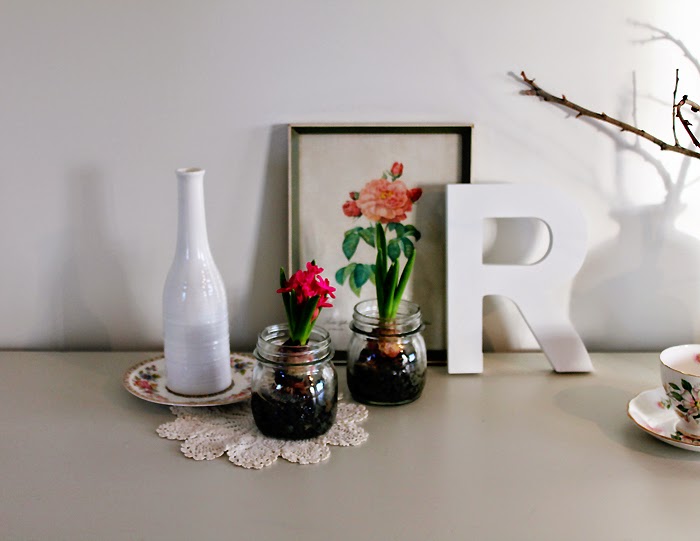 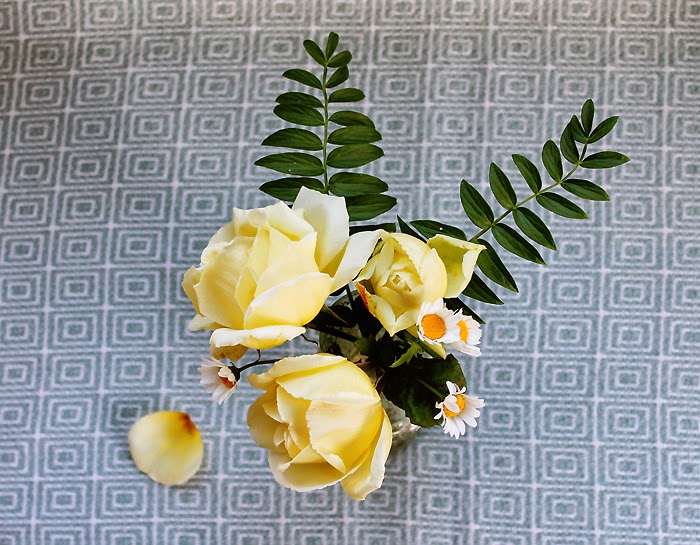 This really was the last of the roses for the season. The green leaves are Jacob's Ladder (polemonium). Such beautifully shaped leaves - they are perfect for vase arrangements as they seem to compliment every kind of flower and fall so gracefully from the container - very little arranging is actually required! 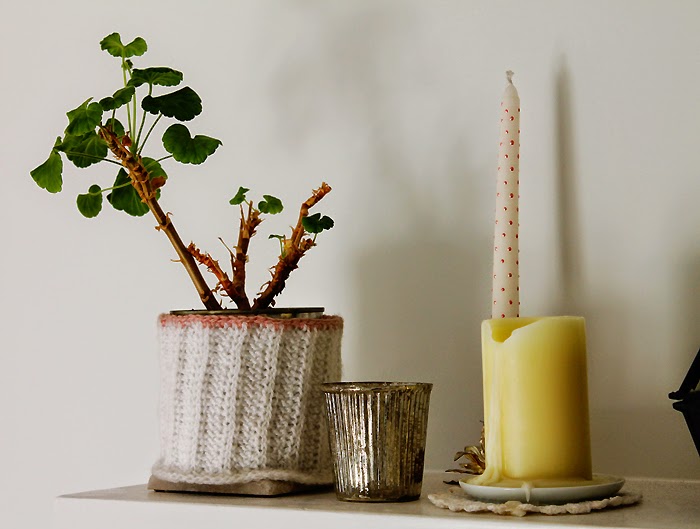 One of my winter pleasures is lighting candles in the evening. Especially scented candles and tealights in glass votive jars. 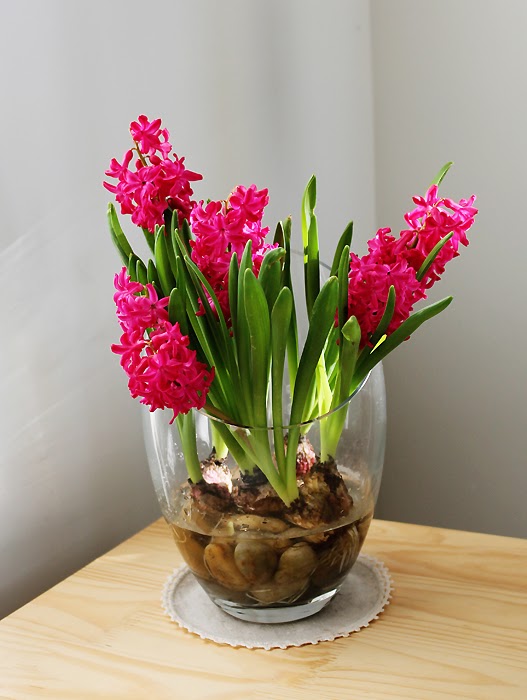 More hyacinths. This vase was a great way to grow them as the high sides supported the flower heads when they got too heavy. When they finished flowering I planted the bulbs outside and transplanted some not yet flowering ones into the vase. 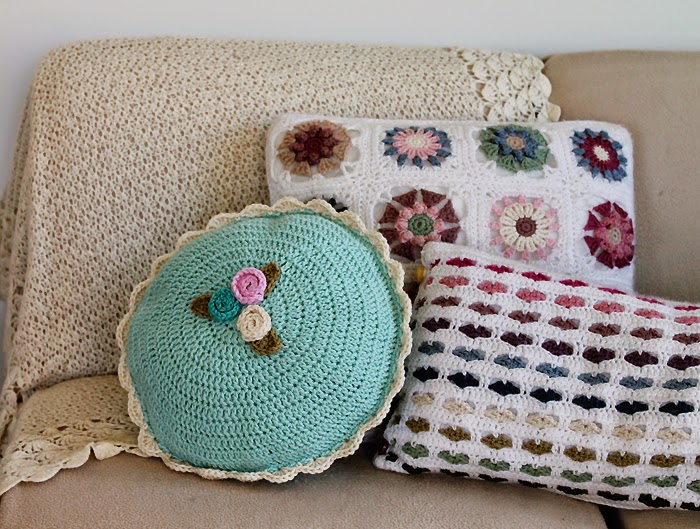 You might remember a couple of months I showed you some Instagram photos including one of a round blue crochet circle. Well, now it's a cushion! All I had to do was add a scalloped border and some crochet roses. Easy and cute. My crochet cushion corner is growing! 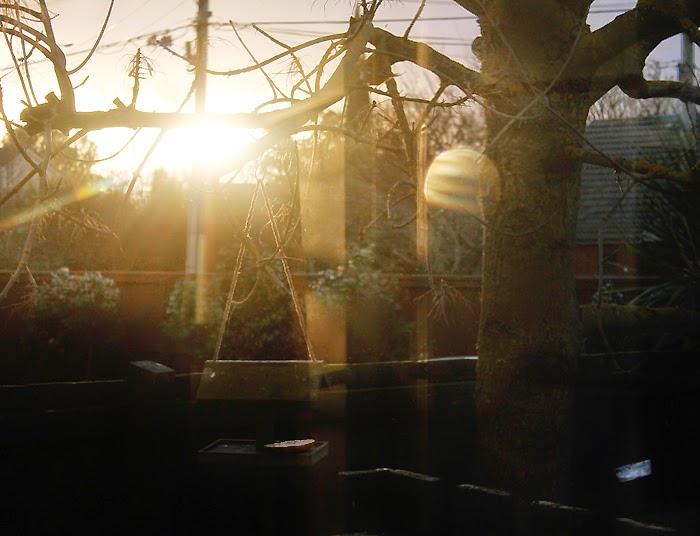 This was taken at the end of a rainy afternoon, where at the last minute the sun peeped in under the thick cloud cover. Then it disappeared below the horizon. However, I am taking heart that sunset is happening a little later every day... soon soon soon I'll have a little bit of light left at the end of the day.
at 20:28 6 comments: 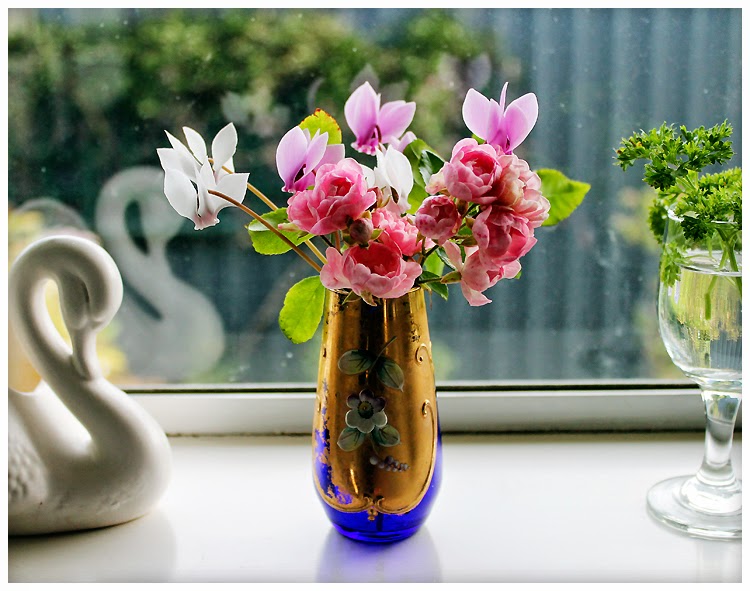 I was going through my photo files recently and came across these pictures from February. With all the hustle and bustle of preparing for the house repairs I never got around to processing and posting them. Since it's raining outside and sleet is in the forecast, I'm going to look at these flowers and dream of summer for a while...

Above is a small posy I made while I stayed at my mum's house when we made the water feature. It's tiny rosebuds from The Fairy rose, and the first autumn cyclamens. Aren't these little rosebuds the sweetest? I think I'll take a cutting from the bush this summer! 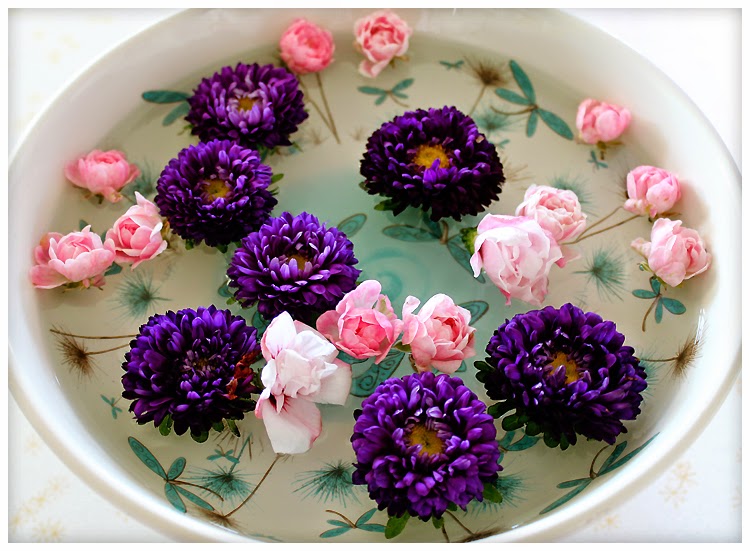 Mum was given a bunch of chrysanthemums for her birthday. I made a few bouquets with them and then floated any broken or leftover heads in this bowl, with some more fairy rosebuds. 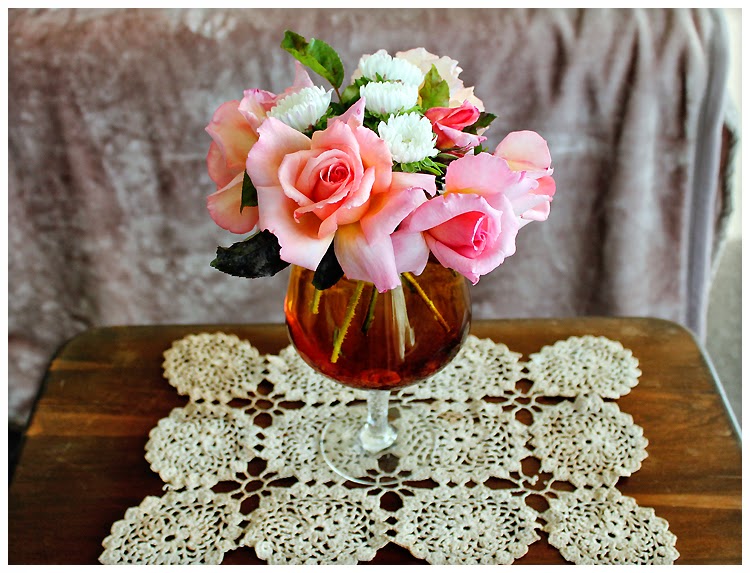 The pink roses are Compassion, and they smell just beautiful. Another cutting I must take this year. They are paired with some white chrysanthemums, in an amber vase which picks up the warm tones in the roses. 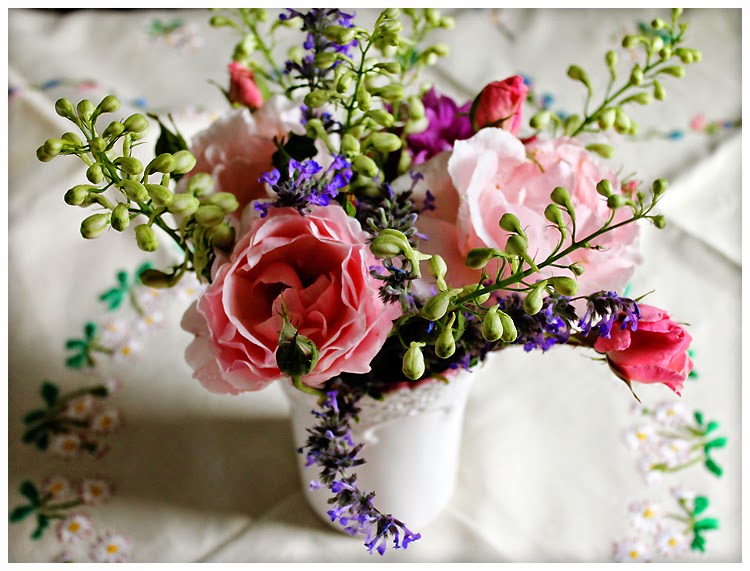 Back at my house, I picked some Queen Elizabeth roses and put them with catmint and delphiniums. I love this romantic arrangement on a vintage embroidered tablecloth. 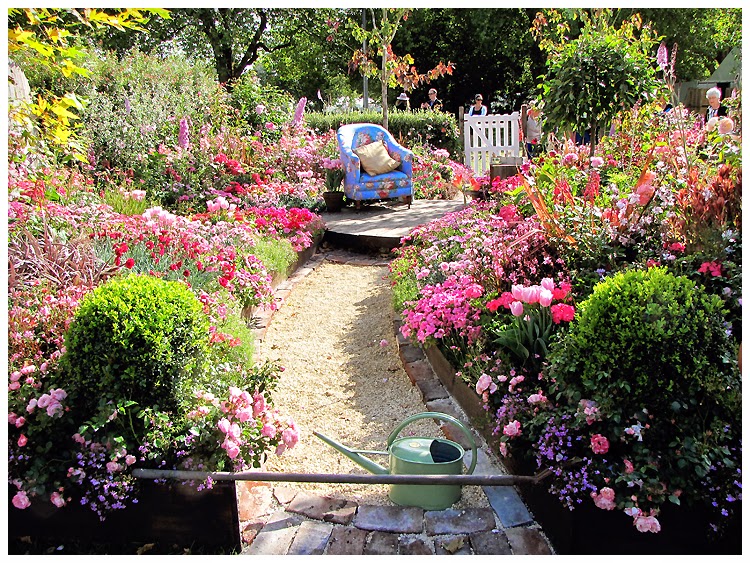 At the end of February was the Ellerslie Flower Show, sadly the last one as it's been cancelled for being too costly and not recouping its costs. This was one of the showstopper gardens. How could I not love it as it's called Passion and is all about pink flowers! 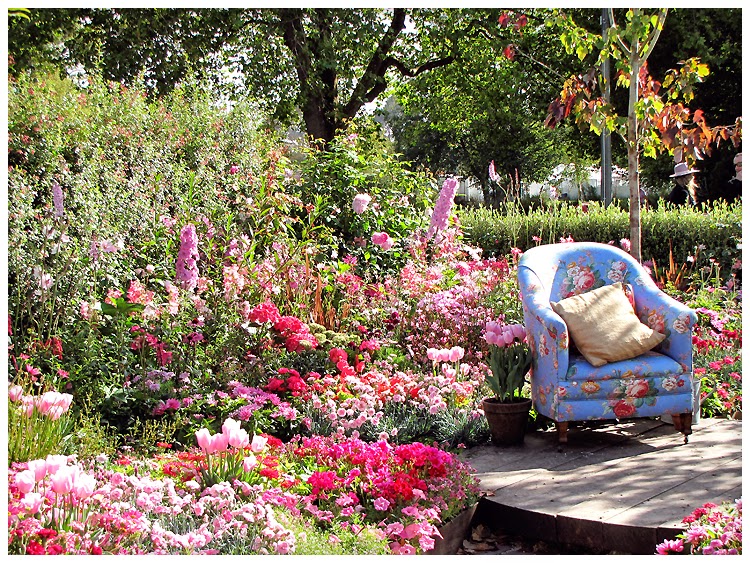 There are over 1000 flowering plants here. I love how girly and romantic it is, down to the flowered fabric covering the chair! 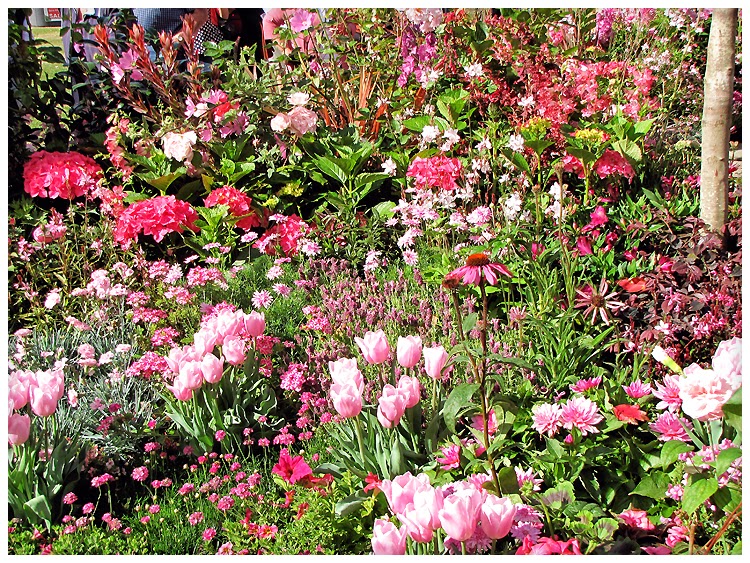 Yes those are tulips mixed in with the late summer plants. I overheard some people talking about it and apparently the designer forced all those bulbs to get them to bloom at such an unusual time. They look beautiful... not something you can really do at home, but the rest of the planting is quite inspiring. It was really nice to see a garden that was all about the flowers, rather than hard landscaping!

Well I've had a nice little walk through summer in my pictures. Now I'll cuddle up under my blanket again and wiggle my toes in their thick fluffy socks. Mr Lui is snoring beside me and we're both counting down the days until it's summer again!
at 21:40 6 comments: 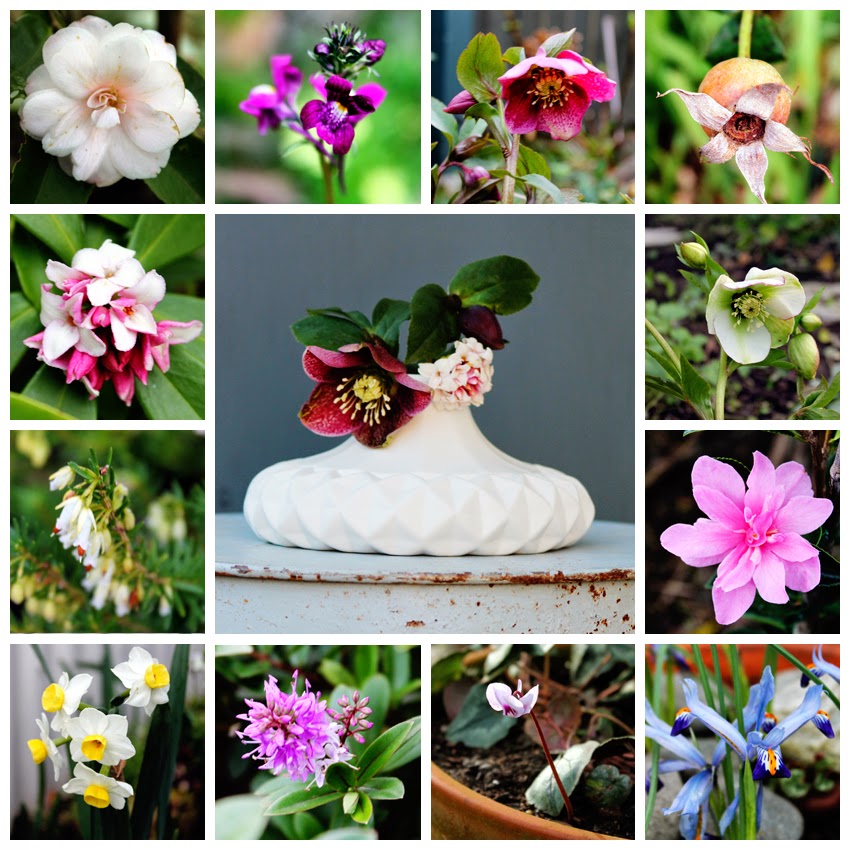 There is plenty in flower in the garden this winter. We've had remarkably mild weather for the past three or four weeks, it's been really springlike some days but almost better, since in spring we get blustery winds. So I've spent as much time outside as possible. I feel like I've barely made a dent in the list of things to get done, but I did enlist some help in chopping down some of the wild shrubbery along the front fence line. Out came the horrible pittosporums and then I realised I had a big empty space to fill. I've got a camellia (Elfin Rose) and a snowball tree to go in there and I think some hellebores will be nice too, so I'll transplant the seedling ones that have come up.

Next it will be rose pruning and transplanting, there's more weeding to do, things to plant out, and before I know it spring will be here! Winter's been great so far, and I feel fully entitled to say that after all the rain and flooding we endured in autumn. However a cold snap is meant to move in tomorrow so I could well change my mind. 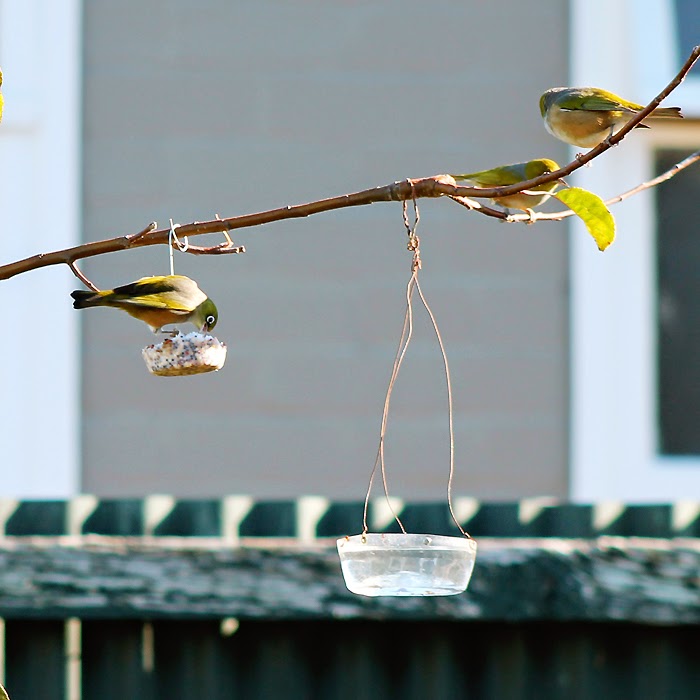 One of my favourite things about winter is feeding the birds. I love seeing little flocks of waxeyes and finches flitting around and chatting to each other while they eat. I have two feeders in the garden, but now that we have bigger kitchen windows I wanted to be able to feed them right outside. My little apple tree was in the perfect spot, but it's branches aren't strong enough to hold a feeding tray... so I came up with an easy way to make hanging birdseed cakes. 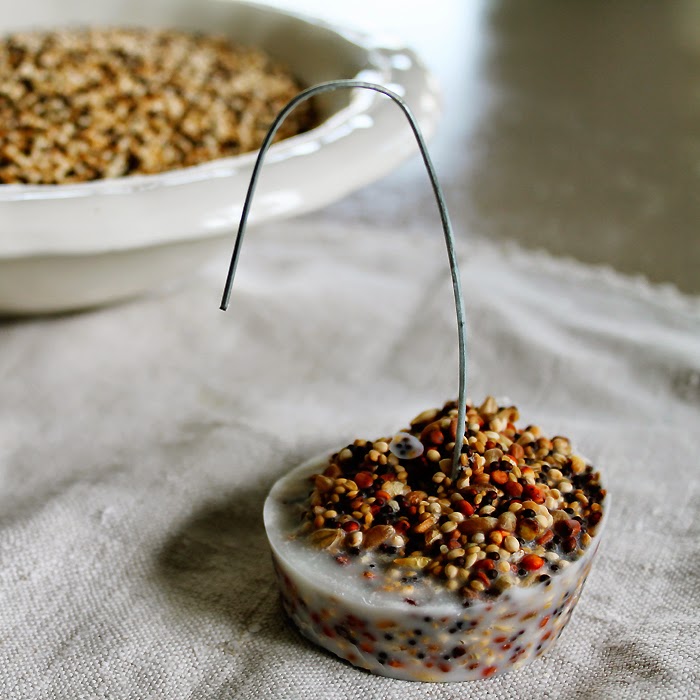 I've posted about my birdseed cakes before, and I usually make a batch of them and put them in my other tray feeders. It's so easy though just to add a wire hanger and then you can put them anywhere. 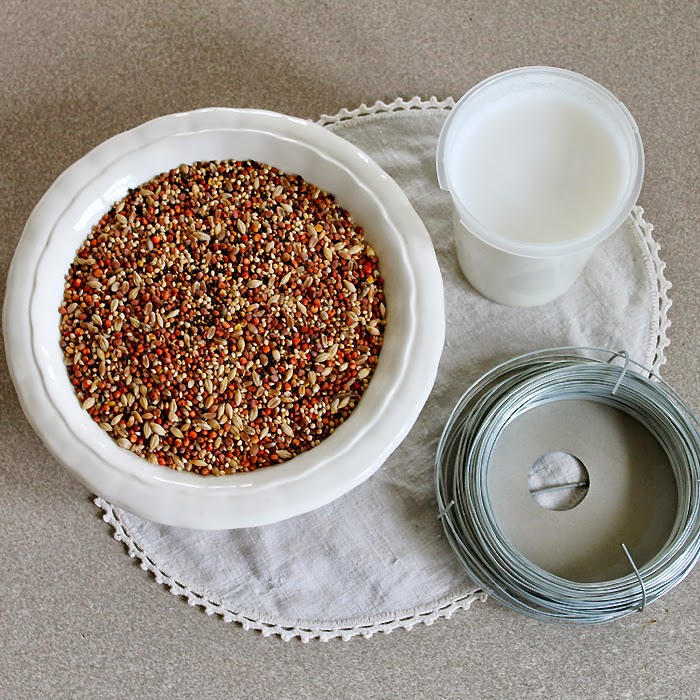 You just need birdseed, fat or dripping, some wire to bend and some pliers to bend it with, silicone muffin trays and a large microwaveable jug. 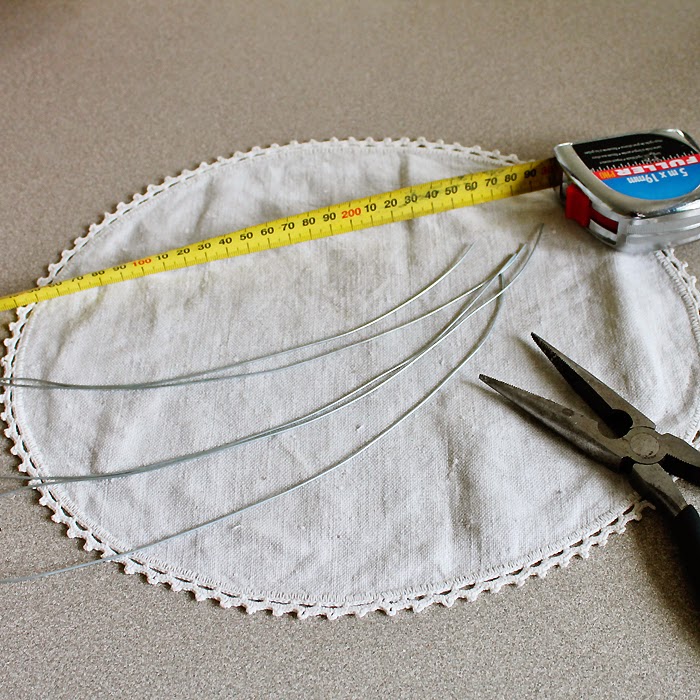 First cut 12 lengths of wire about 30 cm long. The wire just needs to be thick enough to hold its shape when there is a bit of weight hanging from it. 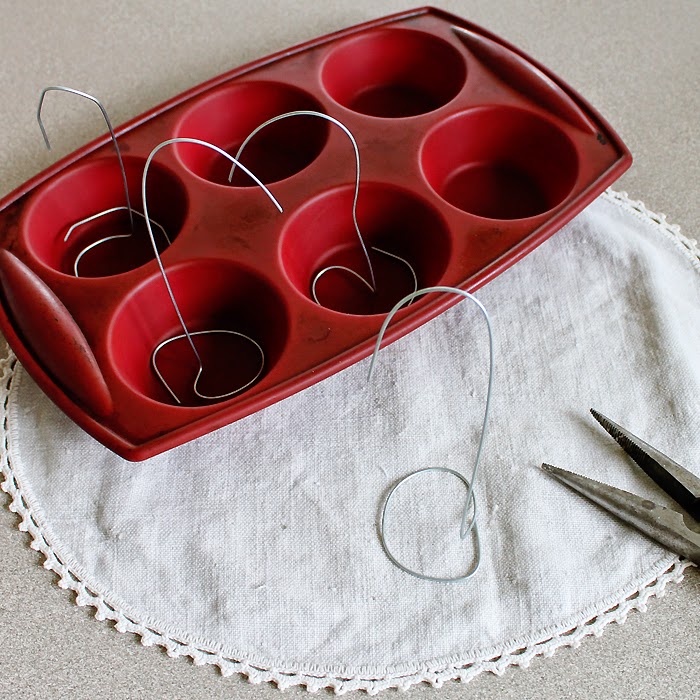 Bend the wire into a rough spiral shape with a hooked end. The spiral just needs to be small enough to fit in your muffin pans. 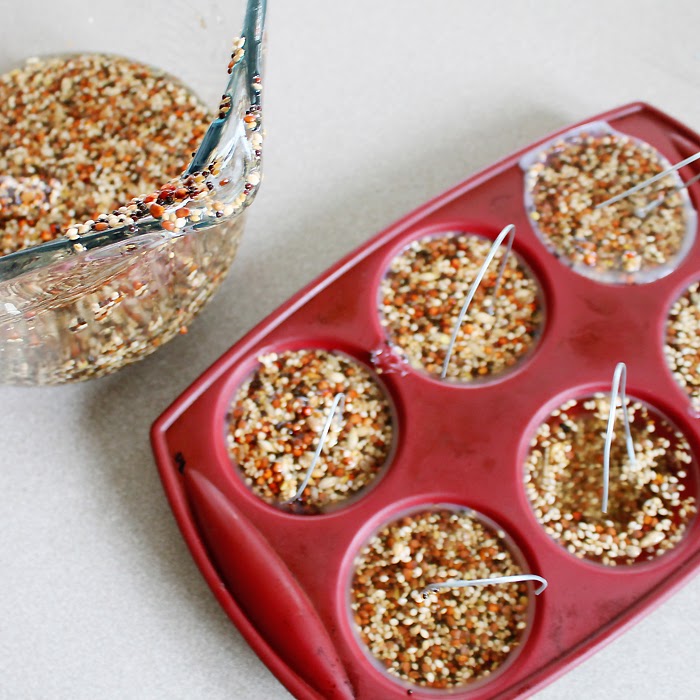 Melt the dripping in the microwave and then add the birdseed. Spoon or pour it into the muffin trays over the wire. Put the trays into the freezer for about half an hour, then just pop the birdseed cakes out. If you have too much birdseed mixture for your trays you can just remelt it and do another batch when the first one is done. Keep birdseed cakes in your freezer, or go crazy and decorate a whole tree! 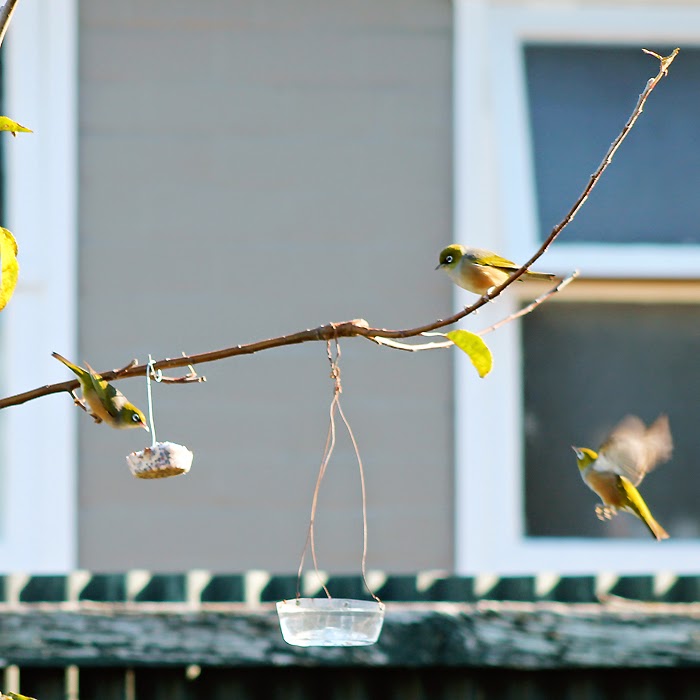