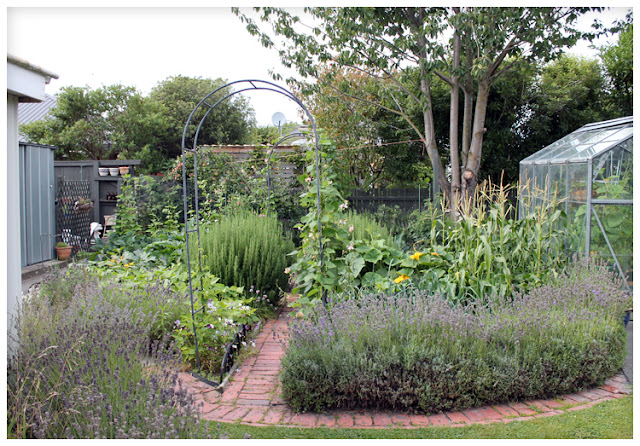 Here are some photos from my summer potager. These photos were taken a good month ago but it's taken me a while to get them edited and uploaded! Still, the garden looks mostly the same (just fuller, bushier and more rampant) so let's have a stroll through the potager. 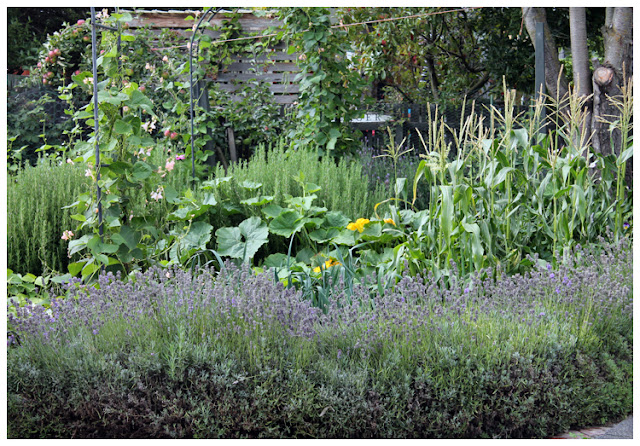 The lavender hedge attracts tons of bumblebees. They are such funny little garden companions, going about their harvesting business and not caring at all how close I get or whether I shove a camera in their face! They also love the bean and zucchini flowers. 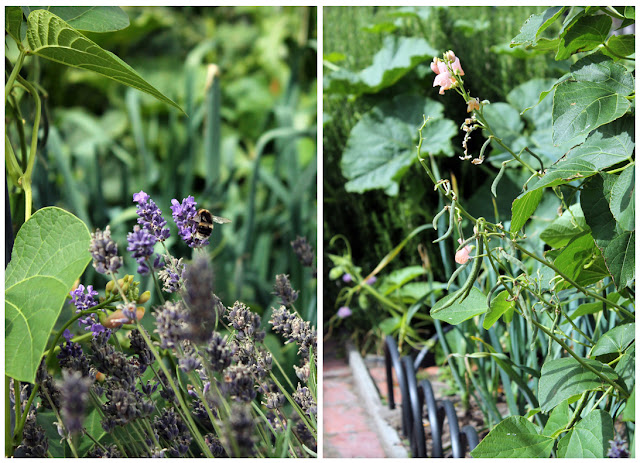 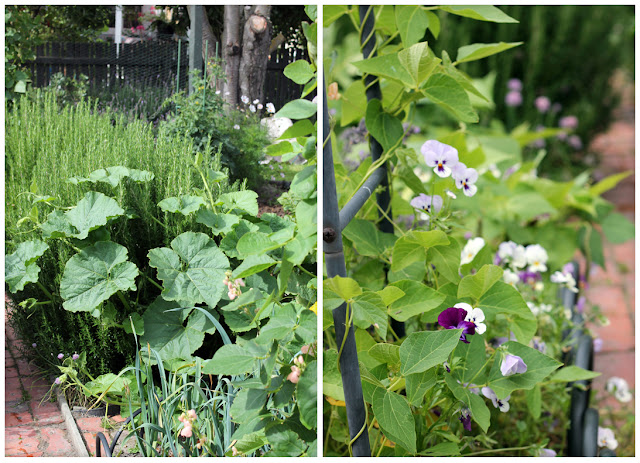 I have Sunset runner beans planted on both arches. The pink flowers add the finishing touch, especially when they mingle nicely with the pansies. In the First Quarter is a Kumato tomato plant - the only variety I bother growing outside the glasshouse now. Even with very little care besides staking (I haven't even remembered to trim laterals for a while) it's growing strongly and has plenty of fruit. Still, I better get in there and trim some branches so it can ripen! To the left is some broccoli and a cauliflower. To the right is a bare patch where I harvested the garlic - I've since planted bright lights silver beet and more broccoli in the space. 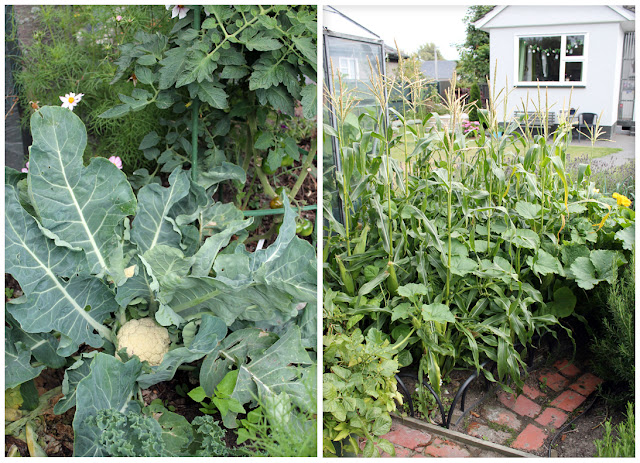 The Cheddar caulis that I sowed in spring did really well and I was able to harvest them at a good size, before there were any caterpillars around to do damage.

On the right in the Second Quarter is sweet corn. It grew strongly from seed but is a bit smaller than previous varieties I have grown, and each plant is only averaging one cob. They taste good but I'd prefer it if I was getting double the yield. I also planted heirloom beans between the corn plants, and there are self seeded pumpkins in there too, bursting out of the garden and hugging everything in their reach. The pumpkins are doing surprisingly well too, setting fruit and all. I've grown pumpkins before, both self seeded and purposely planted, and they never seem to manage to either set much fruit or get it very big. So I'll keep a cautious eye on these and hopefully they will continue to surprise. 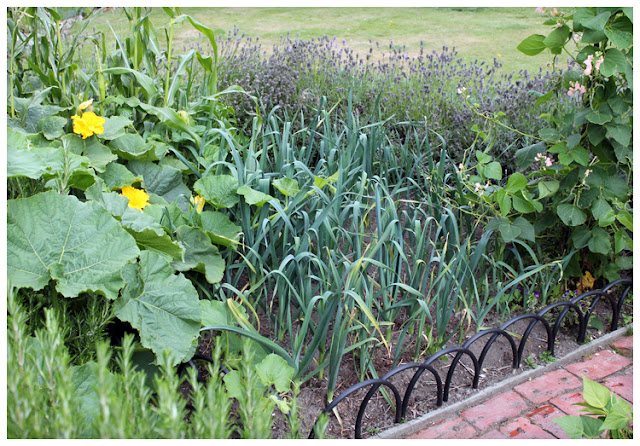 Leeks are growing next to the corn. If they can continue to withstand the attack of the pumpkins, there will be a good stash here for winter! 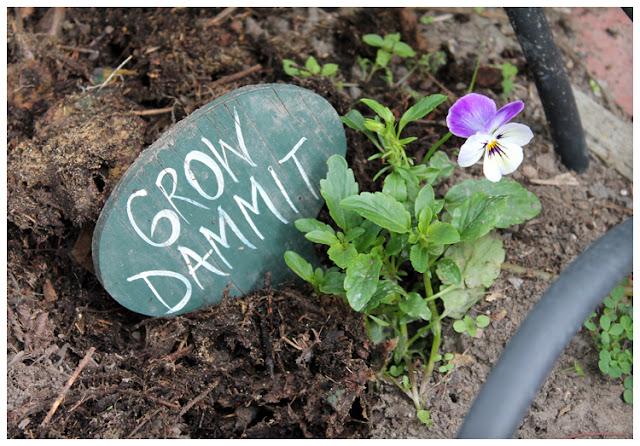 Words to the wise. 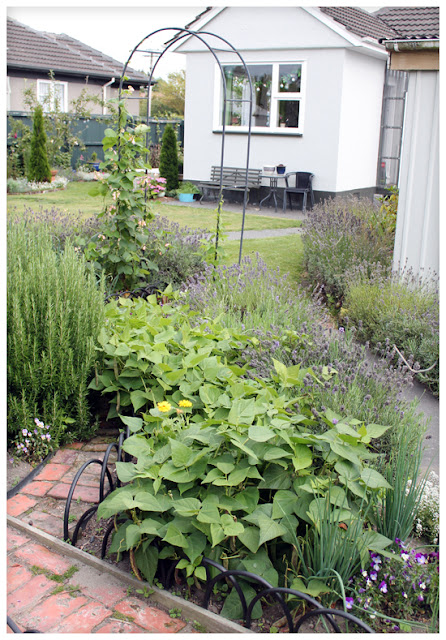 Here in the Third Quarter are Borlotti beans. Since taking this photo, the leaves have started turning yellow meaning that it's nearly time to harvest. After that I'll put the bed to bed for winter. 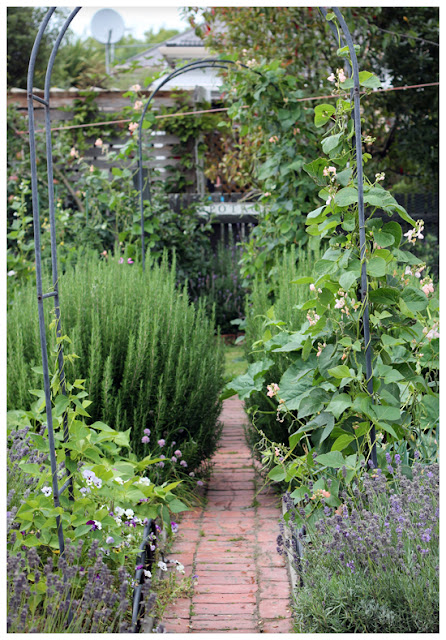 Looking through the arches, past the beans and the pansies and the pumpkins and the rosemary. 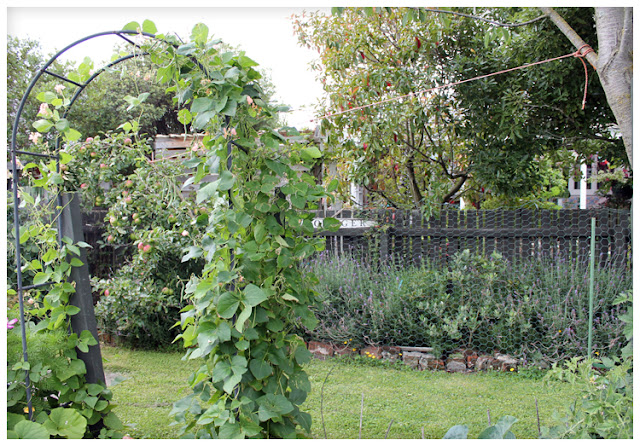 At the very back is my apple tree Monty's Surprise, which is so heavily laden that it's bent right over and I had to tie it to the cherry tree to try and hold it upright! I guess I will need to dig in some really good stakes over winter.

In the meantime there is plenty of harvesting to do - beans, tomatoes, zucchini, spring onions. Time to finish this up and get into the kitchen to deal with some of it!
at 21:05 2 comments: 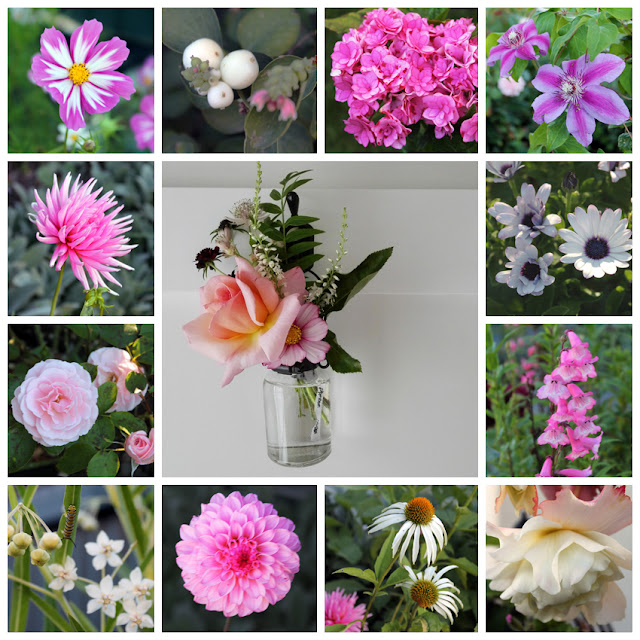 Welcome to my February flowers post! I noticed as I uploaded this that it's my 500th post. I've also been doing Flowers Monthly for almost 6 years! Far from finding it repetitive, I enjoy the monthly ritual of photographing the garden and flowers and collating them into this mosaic to represent what's been in bloom during the month. I go back and compare with previous years, and even though a lot of the individual blooms are the same, each collage has its own personality. It's a reminder that the garden is always changing and evolving even though the same seasons always follow each other.

Anyway, this month the garden is still fresh, but starting to take on its full, slightly overgrown and overblown look. Roses are still in full bloom, but hydrangea petals are starting to speckle and the first autumn berries have appeared. Above, from top left we have: a pretty striped cosmos; snowberries; a new hydrangea called You and Me; clematis William Keay (in his second flowering flush, yay!); osteospermum; pink penstemon; white frilly fluffy begonia; white echinacea; dahlia Cupcake; swan plant flowers and happy munching caterpillar; rose Sexy Rexy; cactus dahlia. In the middle is a little bouquet featuring a Compassion rose - gorgeously scented and grown from a cutting. I have a post planned soon to tell you more about this season's roses and how the cuttings went. 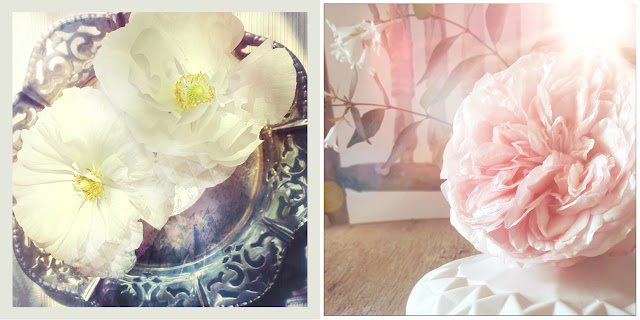 Hi friends. Here is my first lot of phone snapshots from the new year. The weather was all over the place, keeping a semi-regular schedule of its own... A few day of hot temperatures, then a couple of days of cloud. Some rainy days. Then repeat from the start. The garden (and weeds) are flourishing, and as long as we keep getting the warm temps, I'm not complaining too hard. 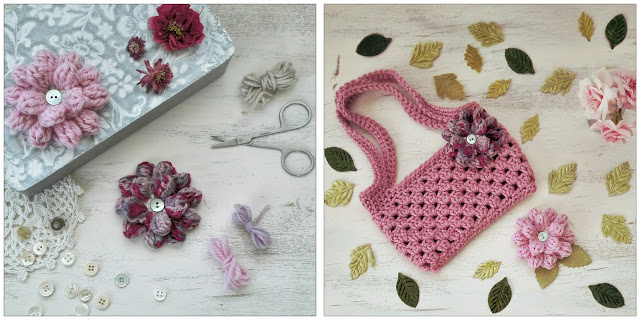 I started the year with a quick project for my niece's 4th birthday. She wasn't super impressed with the handbag to begin with (as she opened it, she muttered to herself, "oh, I hope it's not a hat!") but I'm hoping it will find its way to the dress-up box and be useful in the future! The pattern is from Tangled Happy - if you want to disappoint a 4 year old in your life, you can find it here. 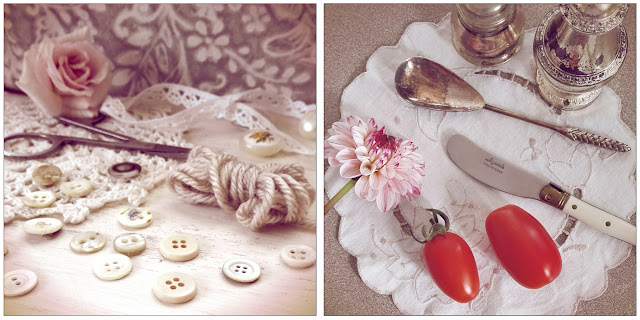 It was an exciting day when I picked the first tomatoes of the season! These Juliet cherry tomatoes were ready on the 5th of January and they were quickly followed by Orange King... I'll go into more detail about tomatoes in another post, but they are all doing quite well this year. I continued working on my Greg blanket. Once all the squares were completed it didn't take too long to join it up, and it was a good way to spend a few grey afternoons. 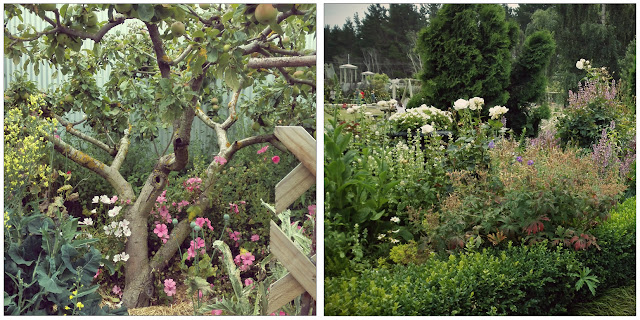 Before I went back to work after my summer holiday, I spent a few days with Mum in Timaru. On one day we drove down to Riverstone in Oamaru. This is a restaurant surrounded by lush, mostly kitchen gardens. They grow all their own produce for the restaurant and visitors are free to wander around and take it in. It's quite a drive to get there but worth the effort! We had a lovely wander around the gardens, before sitting on a sheltered bench with coffee and a punnet of delicious locally-grown cherries. 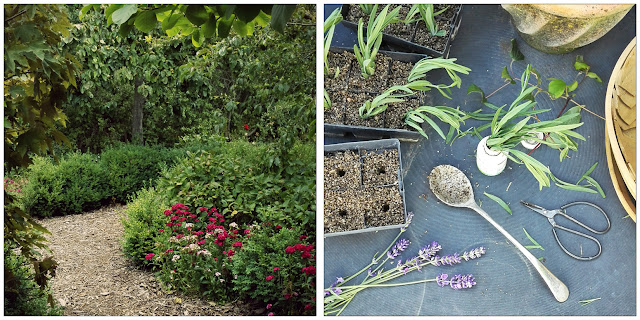 This is another vista from Riverstone. And a view of my propagation station (set up on the top of a compost bin)... I've said before that you can never have too much lavender! 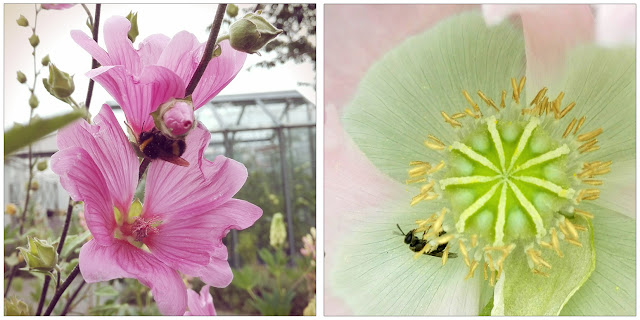 Back in my garden, the bees are getting busy. My garden flourishes mostly thanks to the efforts of bumblebees. There are a few honey bees around, but as we all know they are in decline so I'm glad for the work of my bumbly friends! 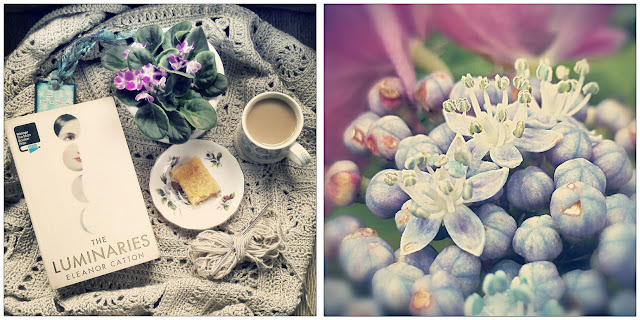 I finished The Luminaries on my second read. It was good, but I think could really have been edited into something a lot slicker. There was a lot of unnecessary epilogue stuff at the end, filling out plot points that had already been explained. I also finished Greg (details in this post). 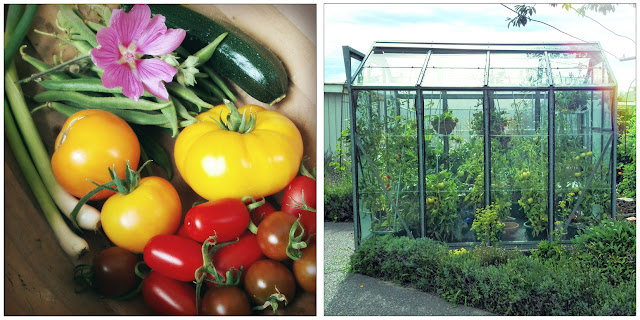 More tomatoes in my harvest basket - also spring onions, zucchini and beans. The glasshouse is in full on production mode and becoming more of a jungle with each day! 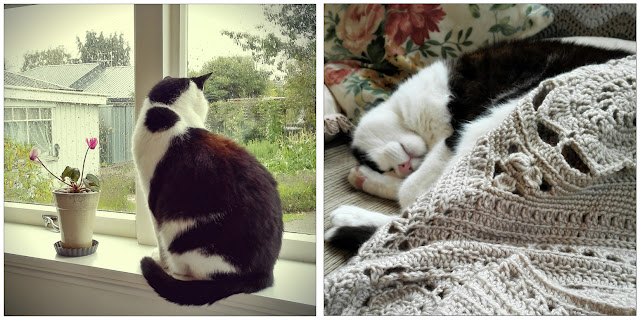 And the month ended on the saddest possible note with the passing of Mr Lui. Still missing him like crazy, but taking heart from these pictures showing him enjoying the everyday pleasures. He mostly had a very happy month.
at 10:42 5 comments: