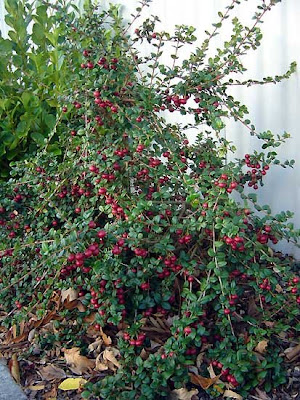 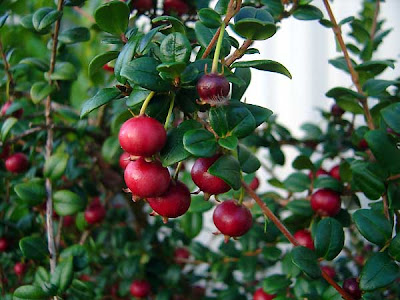 Is this a cranberry? It grows at the foot of my drive near the letterbox. I kept noticing a sweet, sugary smell in the air when getting the mail and traced it back to this plant. I had just thought it was ornamental, after all, wouldn't a cranberry be planted somewhere near the blueberries or blackberries? After a minute's hesitation I ate one of the berries. It was very sweet and quite yummy. Unfortunately I'm not familiar with cranberries and actually thought they were rather tart, so I'm still none the wiser (not reeling with a stomach ache or anything though!)

So... does anyone know what it is?

I actually bought a small cranberry seedling at the flower show, it looks kind of similar but has redder stems. And no berries.

Also, on a gardening high after hearing a talk about compost, I assembled a compost bin this afternoon and nearly filled it. Worm farm is next. We still want to get chookies, but buying a chicken run turns out not to be cheap. I had hoped to buy one in kitset form so I could play builder and put it together but that option is $600 - plus chickens, food etc. Making them rather expensive eggs...