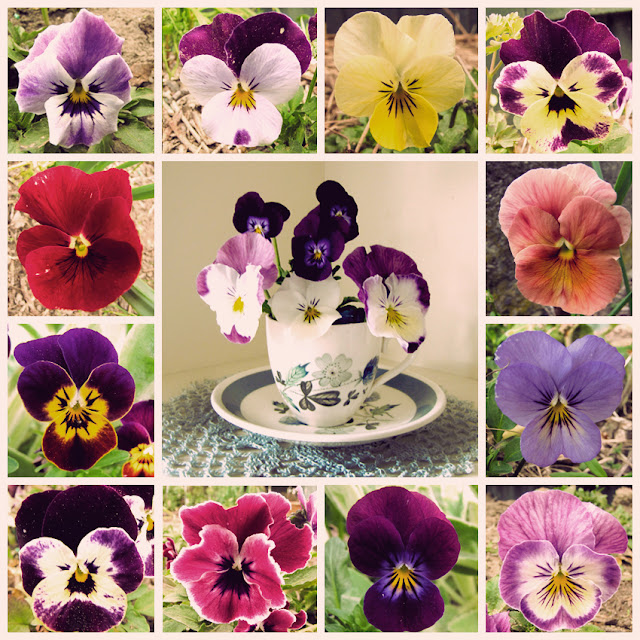 Pansies stole the show in the flower garden this month. I love how they mix and mingle between themselves to create new and beautiful colour strains with each new plant. 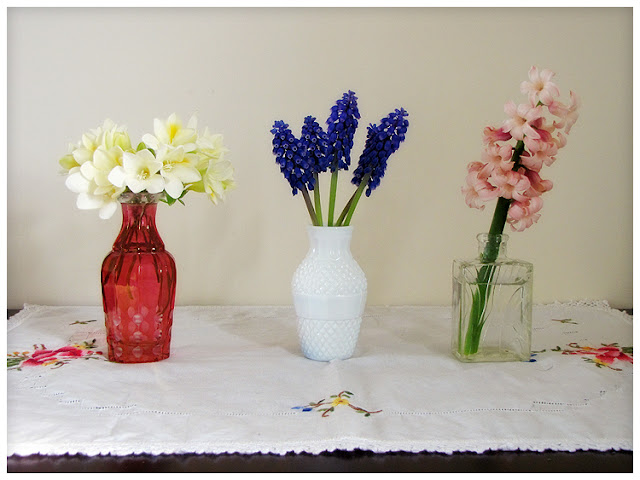 And lovely spring bulbs are blooming. I don't normally go for bright loud colours in the garden, but in spring it just happens and I don't really fight it. I need the hit after gloomy winter. These lovelies made such a gorgeous scented centrepiece, I had it on the kitchen windowsill, and it really cheered me when I drew back the curtains each morning. Such strength of colour and scent. 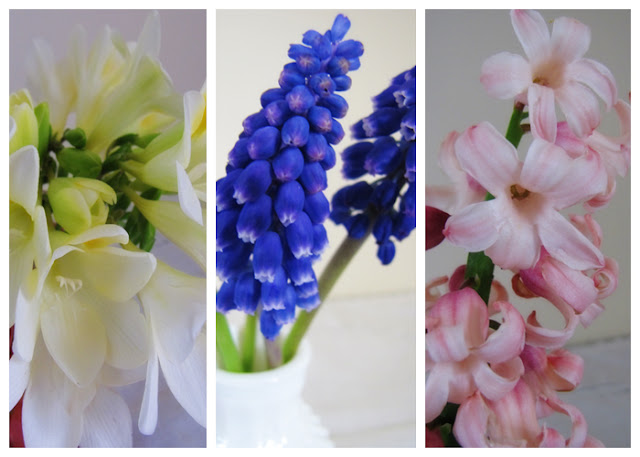 PS I cheated and backdated this post... I really did intend to put it up before September became October! Time is running away with me again.
at 22:18 1 comment:

Edit Feb 2014: I've finally finished the blanket! You can get all the details here. 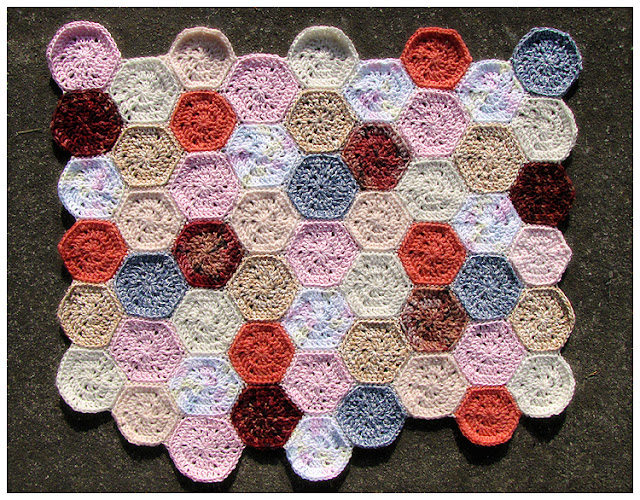 Brighter days and warmer air is calling me to make something in light and summery colours. My latest crochet project was inspired by the gorgeous Beekeeper's Quilt knitting pattern. I just loved the idea of making little woollen hexagons, that from a distance look like a patchwork quilt. There is a great crochet version of the pattern here, which I tried, but I found it time consuming and the hexagons were going to turn out very large. So I decided to make a simple hexagon shape worked in the round, keeping it to 3 rounds so it would be small and sweet. I've tried to work in sock yarn or the equivalent, so it's woolly and warm and there will still be a bit of drape. All the yarn is from my stash, apart from the blue and the coral which I added to give it a bit of pop. 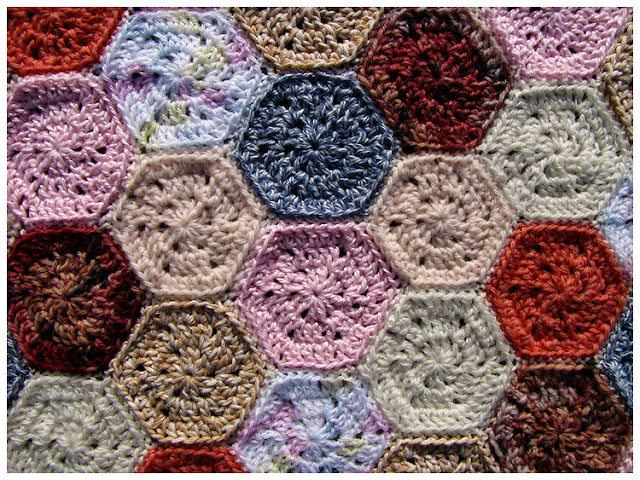 The great thing about simple 3 round hexies is that they work up really fast! I make 3-6 at a time, sew in all the ends, then sew them together into the blanket. This has worked to keep me interested so far as I can see the blanket growing. It only takes 10 minutes to make one hexie, so I can get a lot done in an evening.

I'm imagining this blanket spread out on the lawn holding a summertime picnic.

Are you working on any spring/summer projects?
at 20:43 2 comments: 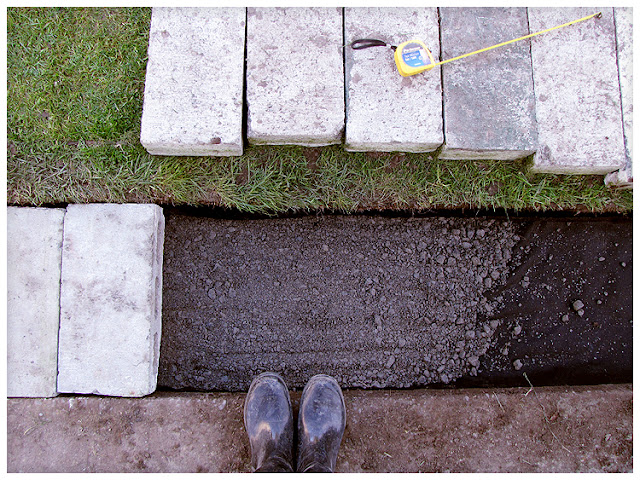 This weekend I finished laying the blocks for the patio. Here it is, with some hastily arranged pots. I'll plant them up properly in the next few weeks... I'm thinking  scented plants like lavender and heliotrope. We'll see, this is a shady spot so it might be ferns and hostas. I have a hydrangea to find a spot for too.

I'll probably change the furniture too as I raided this chair and table set from my other little sitting area. I'd quite like something rustic and timeworn so maybe I'll find something perfect at a market or second hand shop. 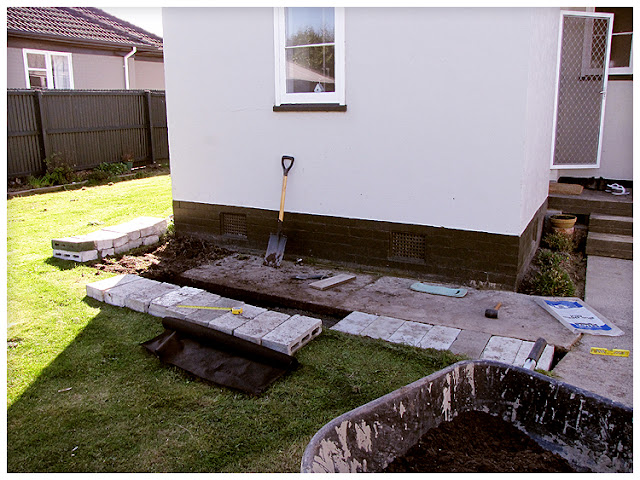 This was quite a full on job... the layout may be basic but those blocks are h.e.a.v.y. It took two weekends to finish. Hard to believe it went from this... 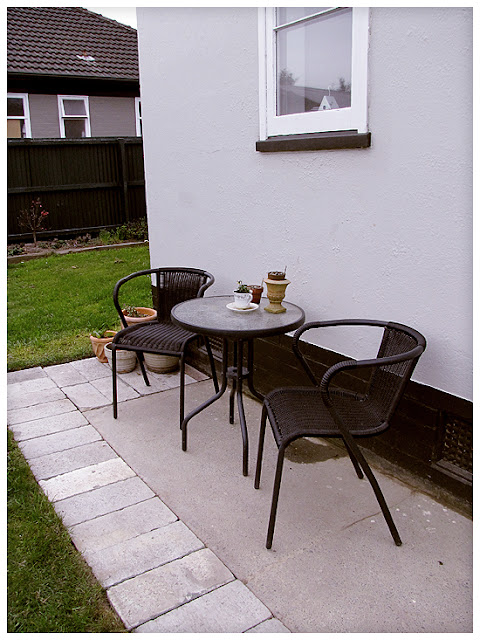 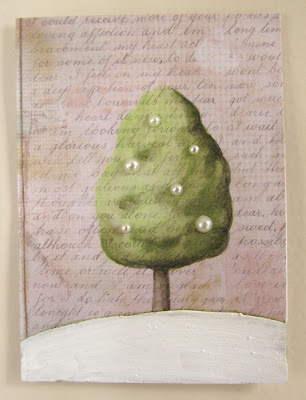 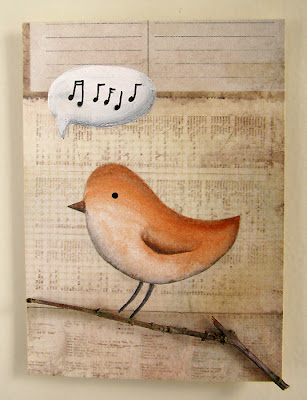 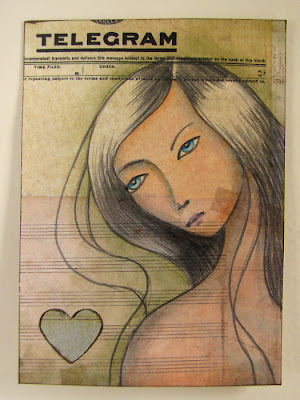 Six down, six to go. Halfway there and I've run out of enthusiasm, as I thought I would. Good thing some more crap weather is on the way - it might be incentive to stay in and finish! I've got a wooden display frame to put them in, so that is also incentive. Lucky there's no deadline on this.
at 17:10 2 comments: 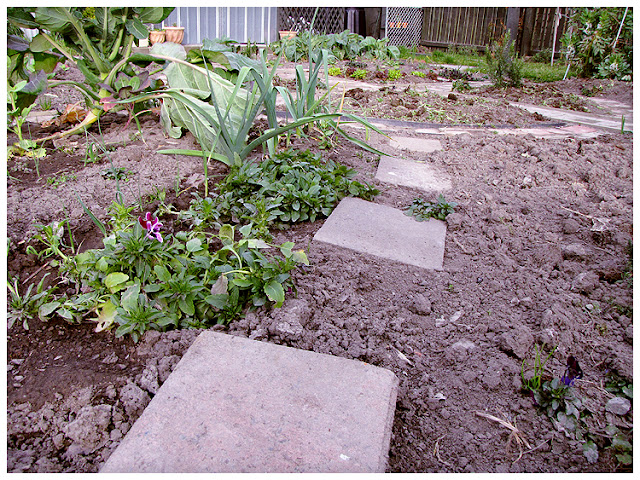 Finally, spring is here. All the dreams and plans formed in winter can now be put into action. I've spent a lot of time reading magazines, browsing blogs, collecting images, and generally daydreaming. I look out the window and think about what I want to see out there. I imagine strolling through the potager on a warm summer evening, and think about what I want to be harvesting. Lest I forget, I jot down notes in my garden notebook.
High on my list of wants is a patio. I want somewhere to put a table and chairs where I can sit and eat and relax. I also want somewhere that's shady during the hottest part of the afternoon. We cleared a lot of shrubbery to make the back yard sunny which I love, but after working hard in the sun for a while I need somewhere to sit and cool off. On the south side of the house there is a concrete slab. It doesn't go anywhere so it's not a path, and it's not big enough to put chairs on, but I can fix it so it does the job! I have a pile of concrete blocks that my neighbour was giving away, so this weekend I've finally finished cleaning the old mortar off them, and started digging out the trench to lay them in. Brick laying is a horrible chore and such hard work, but I just keep in mind that image of my pretty patio... and hopefully it won't take me too long to get this job done. 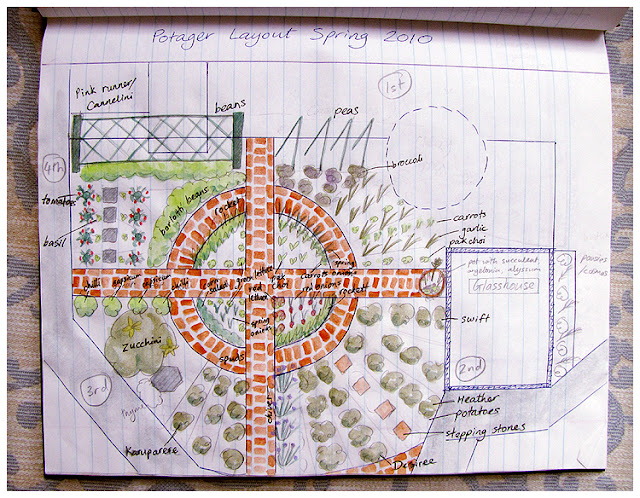 Here are some sketches from my garden notebook. I like to plan out the potager, it rarely goes exactly according to plan but as long as I've allowed room for the staples like potatoes and tomatoes and the bean fence, then I can figure out what else goes where.
This is the plan from last spring/summer. 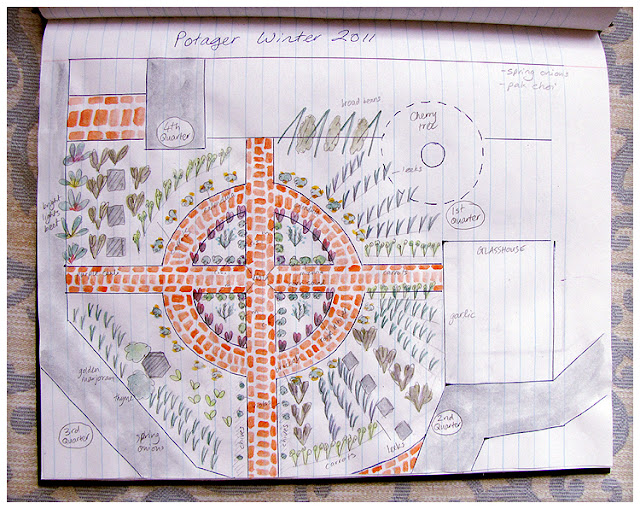 And the plan for winter. I try to rotate things around, or at least plant something from a different family in that space for a different season. It doesn't always work out, because I value form as well as function in vege gardening, but at least I can keep track of it this way! 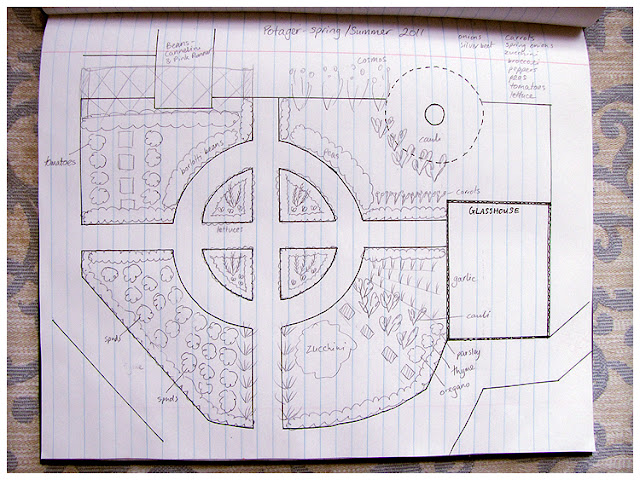 This is the plan for spring/summer this year. Still in pencil because it changes depending on what I have to fit in. Having a drawing is no guarantee I won't impulsively buy a punnet of something I didn't plan for that I will have to shove in somewhere! That's half the fun though.
What are your plans for the garden this spring?
at 17:45 3 comments: